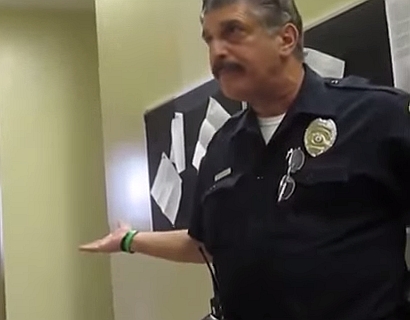 A police officer in New Jersey is under investigation following his comments that were caught on video, stating that he doesn’t have to abide by the constitution since Obama has “decimated” it while in office.

The incident began as resident Steve Wronko brought a camera inside a municipal building while “investigating” alleged problems with the Helmetta Animal Shelter. A police officer, identified as Richard Recine, eventually stopped Wronko and demanded to know who he was and what he was doing filming in the building.

“Did you get that?!” the stunned man asked the young teen reportedly recording the conversation.


“That’s the law of the land, you have to follow it,” Wronko told the cop.

“Then you tell [Obama] that,” Recine replies.

People in authority are to lead by example, and the example that about has made since being in office is for all the wrong reasons.

Next VIDEO ‘All Hands on Deck’: CDC Ramps Up Emergency Response to Ebola. source NBC news