MOSCOW — Asserting that Russian soldiers and armaments had crossed into Ukraine to support the separatists, President Petro O. Poroshenko of Ukraine canceled a trip to Turkey on Thursday, and his national security council ordered mandatory conscription for the armed forces.

“Columns of heavy artillery, huge loads of arms and regular Russian servicemen came to the territory of Ukraine from Russia through the uncontrolled border area,” Mr. Poroshenko said at the beginning of an emergency meeting of the Ukrainian Nation Security and Defense Council in Kiev.

Mercenaries, along with regular servicemen, were trying to overrun positions held by the Ukrainian military, he said, according to a statement on his official website.

“The situation is certainly extremely difficult and nobody is going to simplify it,” Mr. Poroshenko said. “Still, it is controlled enough for us to refrain from panic.” Panic could be used as a weapon just like tanks, armored personnel carriers and rifles, he said. 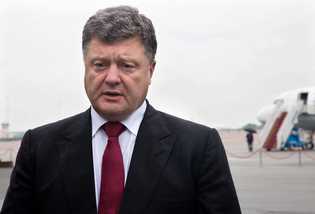 Nonetheless, the deputy head of the council, Mykhailo Koval, announced after the meeting had concluded that mandatory conscription, which was suspended last year, would be restarted this fall, news services reported.

Mr. Poroshenko spoke as NATO releasedsatellite images to corroborate its accusations that Russian forces were actively involved in Ukraine fighting. NATO also said that more than 1,000 Russian soldiers had joined the separatists battling the Ukrainian military.

Col. Andriy Lysenko, a spokesman for the national security council, said that the Ukrainian military was planning a counteroffensive against the separatists and what he called “more and more Russians” in the country, but declined to provide details about military plans. He also accused Russia of sending new antiaircraft defense systems into eastern Ukraine.

Separatists aided by Russia held the town of Novoazovsk, he said, with Ukrainian forces having retreated a day earlier. “There was a regrouping of our troops to better protect Mariupol,” Colonel Lysenko said at a briefing in Kiev, saying the aim was to try to prevent the other side from penetrating the key southern city.

But the leader of the main separatist group in southeastern Ukraine said that up to 4,000 Russians, including active-duty soldiers currently on leave, had been fighting against Ukrainian government forces, Russian television reported.

Next Little Al Sharpton (the Master Baiter), and memorable quotes from Ferguson.