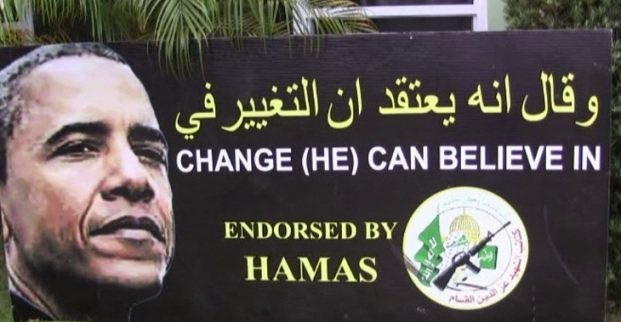 Attorney Larry Klayman, fresh off a preliminary court ruling that the National Security Agency’s spying on Americans likely is unconstitutional, now has named President Obama and others in a racketeering complaint.

Klayman, founder of Freedom Watch and a columnist for WND, alleges the president and others laundered U.S. taxpayer money that was spent on Hamas rockets fired against Israel.

Seeking $1.5 billion in compensatory damages as well as punitive damages, it accuses the global figures of “laundering U.S. dollars” to Hamas, which is officially designated by the U.S. government as a Foreign Terrorist Organization.

Israel and terrorize and kill American and dual American-Israeli citizens who reside or are located in Israel,” Klayman said in a statement.

“The nation and the world have increasingly come to see that Obama views himself primarily as a Muslim and acts accordingly in favoring Islamic interests over Judeo-Christian ones, and the complaint lays out Obama’s history in documented detail,” he said.

Klayman said Obama’s actions “were calculated to harm the nation of Israel.”

“His facilitating and ordering financial and other material aid to Hamas, along with his equally anti-Israel Secretaries of State Kerry and Clinton, and the U.N. Secretary General, is just the latest deadly chapter in what amounts to criminal activity which has logically resulted in harm and death to Jews and Christians and threatens the continued existence of Israel,” he said.

“That is why he and the other defendants were sued under RICO and other relevant laws,” said Klayman.

The White House media office declined to respond by telephone to a request from WND for comment, instructing a reporter to send an email. There was no immediately response to the email inquiry.

The case, No. 14-1484, alleges the defendants conspired to send hundreds of millions of dollars to Hamas “under the false pretext that this financial support will be used for humanitarian purposes.”

“However,” the complaint states, “as recently reported by Voice of America and the New York Times, the recent killing of the chief Hamas financial officer by the IDF confirmed that these U.S. dollars, only some of which [were] found in his bombed out car, [have] predictably fallen into the hands of Hamas’ terrorist wing, which controls and was elected by Gazans to govern over them.”

The case has been advanced to the U.S. Court of Appeals for the District of Columbia Circuit.

Klayman sued the NSA over the collection of telephone metadata from Verizon customers that was detailed in documents released by intelligence-document leaker Edward Snowden. In December 2013, U.S. District Judge Richard Leon issued a preliminary ruling that the program was likely unconstitutional, and the case is currently on appeal before the U.S. Court of Appeals for the District of Columbia Circuit.

His newest complaint, with himself and a number of John Does as plaintiffs, is a civil action and seeks damages from the defendants “for violating plaintiffs’ and decedents’ rights, for engaging in racketeering and other prohibited activities, for engaging in international terrorism, for harboring and concealing terrorists, for providing material support to terrorists and terrorist groups, for directly and proximately causing the deaths of plaintiffs’ decedents, and for directly and proximately causing mental anguish, severe emotional distress, emotional pain and suffering, and the loss of society, earnings, companionship, comfort, protection, care, attention, advice, counsel or guidance, plaintiffs, on behalf of themselves and their sons, plaintiffs’ decedents, have experienced and will experience in the future.”

The complaint notes Klayman recently was in Israel when it was attacked by Hamas.

Klayman, it says, “was subject to terroristic threats, fear, intimidation and blackmail from Hamas, aimed at coercing him from the exercise of his legal rights in violation of the Hobbs Act by Hamas seeking to deny his freedom of travel and public advocacy and business activities in Israel and other activities in Israel by threats and intimidation aimed at coercing him as a person engaged in public advocacy and business activities in and with Israel to leave Israel and disengage with Israel.”

Other “John Doe” plaintiffs also were in Israel at the time of the attacks, the complaint states.

It explains that, according to the law, a person “knowingly finances terrorism when fully aware of facts that would inform an alert person of average intelligence that the probable results of their actions will be to provide funding to a terrorist organization.”

“One may not naively turn a blind eye, not even a president of the United States,” the complaint states.

It says considerable amounts of charity money, public assistance, international assistance and humanitarian aid is motivated toward ending the violence in the Holy Land, but it “gets diverted to the corrupt enterprise, and becomes money that – fell off a truck into the hands of the criminals actually causing the violence and their enablers.”

The complaint says all of the defendants know or have reason to know that “funds and material support provided to Gaza under Hamas’s rule are actually used entirely or in the most part to finance the acts of terrorism, violence, murder, attempted murder, kidnapping, assault, injury, physical attacks, and other criminal activity by Hamas.’

The complaint also notes Obama knows Hamas is officially designated as a Foreign Terrorist Organization by State Department and uses resources it receives for terrorist attacks, including the $900 million the Obama administration sent to Gaza in 2009.

The case also names Malik Obama, a half-brother of the president who runs the Barack Obama Foundation. The case alleges the organization raises money for the Muslim Brotherhood.

Klayman explained the documents were entered as evidence in the criminal trials of former Egyptian President Mohamed Morsi and other top Muslim Brotherhood leaders.


Previous Imminent Terrorist Attack Warning By Feds on US Border