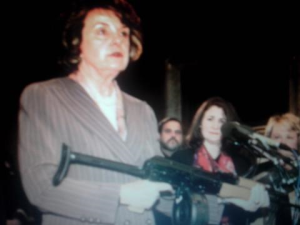 Going down gun-control memory lane one recent day, I thought about California Senator Dianne Feinstein talking about –her distorted belief on the evils of- assault weapons. All the while holding an AK-47 in her hands with her finger wrapped around the trigger, that’s an anti-gun democrat for you. Silly-liberal-rabbit, guns are for freedom-loving Americans who know how to properly HOLD a gun! Yes, certainly nothing is more dangerous than a liberal’s finger on the trigger of any gun. That reminds me, anyone remember another (Land of fruits and nuts) California female politician Councilwoman Sandy Sheedy saying, “Even unloaded guns can kill someone.” What are they smoking out in Cali, I’m laughing out loud again.
Let’s one-up the Feinstein-Sheedy statements by saying that: nothing is more dangerous than an uninformed person entering a voting booth to vote. Dangerous for my families future and for that of my country, because in all reality the uninformed voter is holding my world in their hands. I remember watching some show several years ago, when a group of white forty-something year old women were asked why they had voted for Bill Clinton–are you ready for the answer? Their reply was, “because he was sexy,” WTH! He always did walk with that bar-room swagger, maybe these foolish women liked reminiscing about their good ol’ days with the sleaze-bar one night stands. Seriously though, what does “being sexy” have to do with choosing a president for the largest free-country in the universe?
Now to our pitiful present day voters, it is incomprehensible to be able to rationally critique why Obama was voted into the most powerful office in the world, twice. I wonder what those same women’s excuse would be voting for likes of Obama. Maybe they think Barracks’ granny jeans make his butt look sexy, or maybe his bike riding skills are a turn-on to these type of dim-witted women and their ilk. Whatever the excuse, an enormous segment of our society does not belong in a voting booth.
Voting is an honor which deserves our respect and due diligence. (Due diligence is defined as: appropriate carefulness the degree of care that a prudent person would exercise, which is a legally relevant standard for establishing liability.)
Voting should be treated as an earned privilege, as when one “earns” a driver’s license. So maybe voters should have to purchase voter liability insurance, as drivers are required to carry auto liability insurance. That’s an awe-inspiring idea, this would enable sane voters to sue liberal voters every time our country goes belly-up or down-the-toilet, whatever end you are observing the catastrophe from. Due-diligent voters would be able to sue for liberal pet-projects, rising government debt, pork barrel spending, funding of global warming cures and debunked green energy projects. Do you think there would be any takers for providing liability insurance to silly liberal voters?…I don’t think so.


Previous The Constitution is Not a Living Organism