A Mississippi mother has launched an online campaign for justice after her little girl was allegedly severely beaten in a vicious playground attack last week.

Disturbing images posted to the ‘Justice for AvaLynn’ Facebook page by mother Lacey Harris reveal the kindergarten student’s bruising injuries, which her school claims happened when the five-year-old fell over.

Harris refutes the official explanation from Arlington Elementary School and says that she wants a police investigation because her child’s injuries are simply too severe to have been caused by a fall. 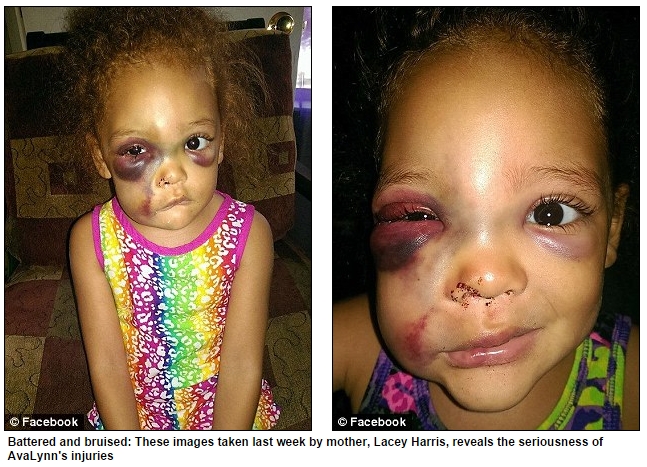 According to Harris, her daughter AvaLynn was kicked until she fell off the slide in the playground during her first week at Arlington Elementary in Mississippi.


The Pascagoula School District said that nothing violent happened to the little girl and she merely fell to the ground whie outside playing.

A post on the ‘Justice for AvaLynn’ Facebook page gives Harris’ alleged account of how her daughter was left with such severe black eyes and swollen features.

‘The school basically claims that Ava injured herself, as all the photos depicting her injuries will debunk. The local PD claims that there has been no criminal act, which the injury photos also disprove.’