Virginia Democrat who once sought the House seat formerly held by Eric Cantor, now claims to have a radio program and says he intends to pray that God would murder everyone in the NRA with Ebola. 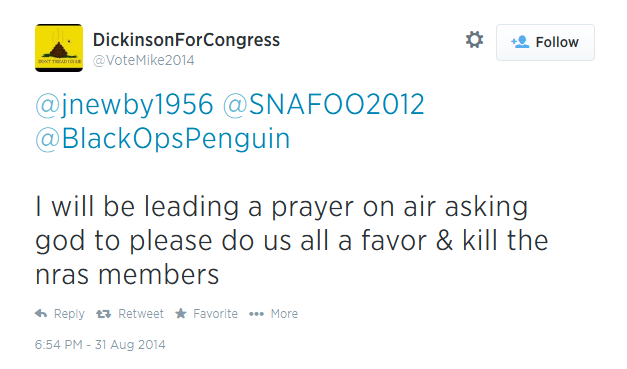 He followed up with this:

Naturally, that didn’t sit too well with anyone.

@VoteMike2014 @NRA coming from the man who just wished death upon 5 million people. You are the terrorist.

@VoteMike2014 @NRA Hey Mr. Dickinson, I'm a life member of the NRA and I don't appreciate your remarks. You should get counseling.


@VoteMike2014 @Ucster @NRA Mike has to find crazy things to say to get attention. That's how pathetic his life is.

Dickinson, however, wasn’t finished taunting NRA members, so he issued this:

Dickinson claims to have a regular program on WHAN radio in the Richmond, Virginia, area.

We were not able to confirm that however.

Dickinson first gained national attention when he claimed Fox News lies and suggested Soviet-style monitoring and regulation. Although he talked tough on Twitter, he crumpled like a cheap suit when he actually faced those he accused. In a masterfully conducted interview, Greta van Susteren got Dickinson to admit he lied about his connections to local adult businesses.

Video of his interview with van Susteren can be seen below:

In February 2011, I first said liberalism is an ideology of rage and hate.  Liberals prove that assertion correct every day, and Dickinson proves it with every tweet.

Next Untraceable returning jihadists pose ‘serious threat’ to US