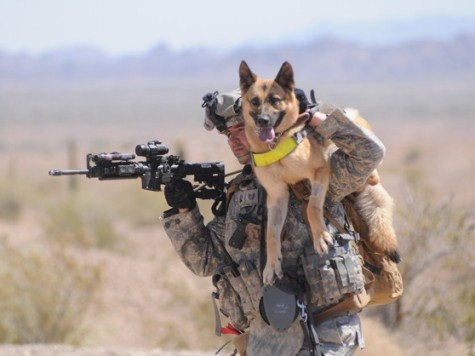 In his USA Today column, Jonah Goldberg exposes a national disgrace I was completely unaware of, one that is almost too heartbreaking to comprehend: the United State military sometimes reclassifies combat dogs as “equipment” and abandons them to languish in shelters overseas in war zones.

Other than the fact that combat dogs save an average of 150 American lives during their service, these living creatures form strong emotional attachments to the men assigned to them. But when their time is up — when they become too old, combat fatigued or shall-shocked to be useful in combat — rather than transport them home for adoption, they are sometimes heartlessly abandoned.

It is one thing to ask these warriors to say goodbye to their dog when it is still on active duty and is assigned a new handler, which often happens. It is quite another to ask them to leave these dogs behind when the dogs are effectively abandoned overseas, left to languish in shelters — or worse. That’s why handlers are sometimes forced to make incredible sacrifices to get their four-legged comrades home on their own.

Many of these dogs do find their way back to American soil, but some still slip through the cracks. While the National Defense Authorization Act for FY 2013 authorizes the transfer of a retiring military working dog if no suitable adopter is available at the military facility where the dog is located, this is not guaranteed. The fact is that if a military war dog is retired in a non-combat zone overseas, that dog becomes a civilian and cannot travel on military transport. [BeHumane]


Previous YAY! The Feds have lost track of 6,000 foreigners on US soil with visas who could pose a threat

Next [WATCH]Libyan militia swims and parties in seized US embassy