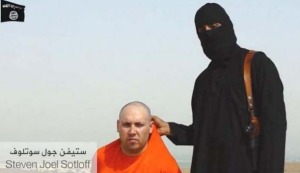 By Jamie Weinstein, The Daily Caller

During a press briefing at the State Department Tuesday, Rosen artfully guided Psaki into revealing the Obama administration’s contradictory policy in dealing with the terrorist group the Islamic State in Iraq and Syria (ISIS): while the administration is using the War Powers Resolution to strike ISIS in Iraq, it refuses to say we are actually at war with the group.

See below the transcript of Rosen’s back and forth with Psaki:

Rosen: What is the legal authority under which President Obama has launched the more than 100 air strikes that you just referenced?
Psaki: In Iraq? Well, the Iraqi government has invited the United States in to help them address this threat and that’s the legal authority.
Rosen: And he has reported to Congress on this subject, has he not?
Psaki:  Yep.
Rosen: Under the aegis of what statute?
Psaki: He does War Powers Acts every time there’s a need to notify Congress.
Rosen: So we have a commander in chief that launched more than 100 air strikes at a given enemy who is reporting to the Congress under the aegis of the War Powers Act. Who is watching our people beheaded by this enemy, but who for some reason feels queasy about saying that we are in fact at war with this enemy?
Psaki: James, I think — I’m not going to put new words into the mouth of the President of the United States. My point is that his actions to authorize these strikes, his effort to send Secretary Kerry, Secretary Hagel, any resource we have in the United States to lead the building of a coalition speak to his commitment to his commitment to taking on this threat. And of course we want to see ISIL destroyed, but that is not an overnight effort.