Arkansas pizza parlor owner Steven Rose refused to back down after an atheist activist organization sent a warning letter claiming the restaurant’s church bulletin discount promotion was against the law.

The organization, Freedom From Religion Foundation, claims the discount is unlawful because atheists can’t participate in it. 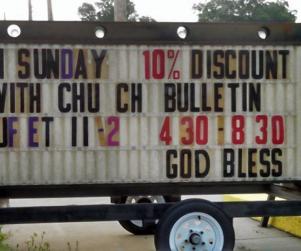 Since it was opened in July, Bailey’s Pizza has asserted itself an establishment focused on Christianity.

“God is the center of our lives,” a plaque on the restaurant’s wall reads, “so our Scripture wall is at the center of Bailey’s Pizza!”


The plaque also notes that patrons can ask their waiter for a marker to write other words of wisdom on the wall, or their favorite scripture.