A California woman who pleaded guilty to causing a head-on crash that killed an off-duty firefighter last year will only spend one day in jail, a San Diego judge ruled Friday. 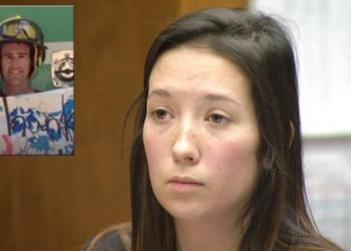 Natasia Wood, 22, will spend one day at the Las Colinas Detention Facility for her part in the October crash that killed 37-year-old U.S. Forest Service firefighter Darin Steffey.

The crash occurred on a curvy portion of Buckman Springs Road outside of San Diego. Police said Wood was driving her friend’s Dodge Durango at a little over 70 mph when the crash occurred. According to courtroom testimony, Wood lost control of the vehicle on a sharp left-hand curve and veered into oncoming traffic where she collided head-on with Steffey who was riding his motorcycle. He died at the scene. The posted speed limit on that stretch of road is 55 mph, according to Fox-5 San Diego.

Wood will serve her one day sentence October 3, 2014, the one-year anniversary of the crash.

Next Palestinian children celebrate Hamas' Summer of Rockets on Israel