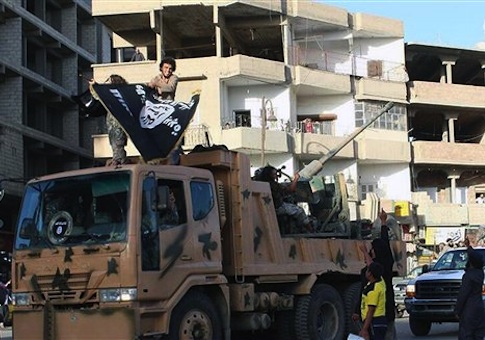 Fighters from ISIL during a parade in Syria / AP

Al Qaeda and the Islamic State of Iraq and Levant (ISIL or ISIS) have significantly stepped up their recruiting efforts in Pakistan and other South East Asian countries, highlighting the competition between the two terror groups to enlist radicalized fighters.


Al Qaeda head Ayman al-Zawahiri released a rare video message on Wednesday announcing the creation of a new terror offshoot called “Qaedat al-Jihad in the Indian subcontinent,” according to the SITE Intelligence Group, which translated the 55-minute video.

Reports concurrently emerged on Wednesday that ISIL had launched its own recruiting campaign in Pakistan and Afghanistan, where the terror group is said to be distributing pamphlets urging locals to join its fight to establish a caliphate, according to Pakistan’s Express Tribune.

The simultaneous recruiting efforts by al Qaeda and ISIL in South East Asia is a sign that the terror groups are in competition in the region, with al Qaeda seeking to reassert its dominance as ISIL grows in popularity, according to regional experts.

“The big question here is going to be, ‘Will there be competition between ISIS and other hardline Sunni jihadist groups already operating in Pakistan or will they in fact come together the same way an earlier generation of jihadists came together with Osama Bin Laden when al Qaeda was founded,”Sadanand Dhume, a journalist and South Asia expert, told the Washington Free Beacon.

“Are we going to see this competition or see them come together and we don’t know the answer to that,” said Dhume, a resident fellow at the American Enterprise Institute. “But this just has made things even scarier for religious minorities in Pakistan and also non-Sunni [Muslims], and those these people they regard as heretics.”

Zawahiri’s video message announcing a new terror affiliate could be a sign that al Qaeda is feeling pressure to compete with ISIL, Dhume said.

“Zawahiri feels a need to reassert his relevance with ISIS running away and capturing the imagination of the jihadist model in the Middle East and also South East Asia,” Dhume said, referring to several reports of Indians joining ISIL and others showing them sporting ISIL t-shirts.

“The larger context here is that ISIS has been getting so much more attention and Zawahiri, partly because he is underground, I imagine that’s one of the drivers of this announcement,” he explained.

Zawahiri invoked bin Laden in his video message when he announced the creation of Qaedat al-Jihad in the Indian Subcontinent, according to SITE.

“It is an entity that was formed to promulgate the call of the reviving Imam Sheikh Usama bin Laden, may Allah have mercy on him, to call the Ummah to unite round the word of Tawhid [monotheism], to wage jihad against its enemies, to liberate its land, to restore its sovereignty, and to revive its Caliphate,” SITE quoted Zawahiri as saying.

Zawahiri also discussed “differences and discord” among jihadists—a potential reference to ISIL—and urged fighters to unite, according to Site.

“O mujahideen, unite and reject differences and discord, and hold firm to the rope of Allah and be not divided among yourselves,” Zawahiri is quoted as saying by SITE. “This entity, Allah permitting, was established to unite with its mujahideen brothers and the Muslims all over the world, and to crush the artificial borders established by the English occupiers to divide the Muslims in the Indian subcontinent.”

The ISIL pamphlets spotted in Pakistan and Afghanistan promote the terror group’s vision for a Muslim caliphate, according to the Express Tribune report. ISIL stickers and wall drawings urging people to join the group also have reportedly been spotted.

Al Qaeda has had trouble competing with ISIL’s propaganda machine, which includes scores of Twitter accounts and other social media vehicles, Dhume said.

“ISIS has become much more prominent thanks to its skillful use of propaganda and its dramatic battlefield victories,” he said, explaining that jihadi groups are being forced to compete for a market share among radicals. “Which of these two brands is going to be the more successful one?”

“There’s a reassertion by al Qaeda to freshen its brand,” Dhume said, referring to the latest Zawahiri video. “What you’re seeing over here is [ISIL] filling a vacuum left by al Qaeda’s top leadership either being dead or completely driven underground.”

As ISIL continues to gain ground, one lawmaker in Congress is moving to formally declare war on the terror group.

Rep. Frank Wolf (R., Va.) announced on Wednesday his intent to file an authorization for use of military force bill that would permit the Obama administration to declare war on ISIL, as well as several other terror affiliates.

Next Dumber than a fourth-grader. Vladimir Putin on the American leftist elite.