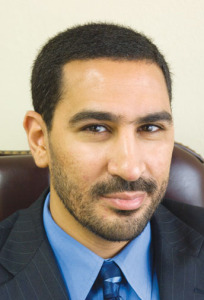 Muslim Brotherhood supporter, DHS “Senior Fellow,” and Obama advisor (no, that is not a joke), Mohamed Elibiary has resigned his position at DHS, ostensibly to remove the heat his boss, Barrack Hussein Obama, is feeling for Elibiary’s lofty and sensitive position at DHS.

Among the more controversial remarks Elibiary has made during his tenure in Washington are that The United States is a Muslim country and the Islamic Caliphate is inevitable. This man has had access to sensitive classified material, relating to homeland security, for years.

Elibiary may be moving on but he is not moving out (of The United States). He is taking his show on the road to Texas to “help ‘them’ form a new Homeland Security Think Tank.” I’m not sure who “them” is but the obvious presumption is that “them” are not necessarily friendly to the American people.

One Texas tweeter’s reaction to the news that Elibiary is Texas-bound….

Next [GRAPHIC] Autistic Boy Accepts Ice Bucket Challenge, Gets Soaked With Excrement Instead