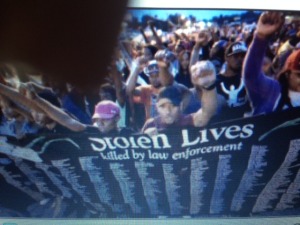 A Freudian slip which Wikipedia defines as… an error occurring in speech or memory as occurring due to the interference of an unconscious (“dynamically repressed”) subdued wish, conflict, or train of thought guided by the ego.

With that being said, Ferguson had a massive Freudian slip, popping up its ugly head thru racial vengeance aka, ghetto riots. They say –thru interviews- that their anger was directed toward the-within his right to defend himself-police officer doing his J.O.B! Yet what have we seen reported over these few weeks? In typical ghetto fashion the natives are restless and striking out at whites all over America -whilst probably still simmering over the Trayvon killing- as if whitey –in general-shot Brown and not the pO-lice.

Here are just a handful of examples…CNN’s white camera crew reporting from Ferguson were pelted with rocks…A Ferguson phone store owned and operated by a white resident, was looted and destroyed…The original scene of the crime minimart operated by a Indian/Pakistani was burnt to the ground in Ferguson.

A few days ago here in Houston, an elderly white man in his 70’s was walking down the street when a car pulled up, a black male got out, who then punched the victim full force before driving off. Ironically this man’s granddaughter-who spoke to the media- is black!


This last week I experienced whitey payback time at my doctor’s office, where we-my family- have been patients for 7 years, though we are never sick enough to be regulars. I made a visit because I have this ridiculously huge zit on my face, where it appears as though an alien will come popping out. Long story short, I was the first and only patient there and two hours later I was still waiting to be seen. The office was full of black patients coming in after me, being seen and then driving off! I was the only white person in the office including staff. After two hours I left. I’m good with being racially mixed, if not we would have found a different Dr.’s office to go to years ago. I have always had black and Hispanic friends, but I’m starting to get…Well, pissed.

An elderly woman in Central Park was attacked from behind and shot in the head with a pellet gun. Her attackers yelled “F___ you, you f______ white b____,” one woman in the group yelled. Another black male jumped from a bush and yelled, “F___ white people.” The group then left the scene, leaving the elderly woman injured and crying. Luckily, she was brought to a hospital and treated shortly thereafter. {Reported by AmericanNews.com} Yep, in their sick minds, it was whitey pay-back time.

Then {as reported at D.C.Clothesline.com} a white Marine was left in an induced coma. Ralph Weems IV is a a 32-year-old former Marine and veteran of the Iraq War. On Sunday, August 24, 2014, at around 2 a.m. in West Point, Miss., Weems was severely beaten by 20 blacks who reportedly were seeking vengeance for Michael Brown.” Well I don’t hear J.J. Jr or ol’ Al Sharpton yelling for true justice for the victims of black hatred…I only hear crickets.

Another victim, where it was reported that it will take plastic surgery to properly fix the injury suffered by the 25-year-old victim, who asked not to be identified by name. It happened Thursday night when three black teenagers attacked him, throwing a rock at his face as he walked down Montgomery Street after leaving his lifeguard job at the nearby Otterbein Swim Club. Police say one of the suspects, 19-year-old Sidney Joyner, tried to stab him with a pocket knife; the victim dodged the blade. Politically excused Freudian slips are running rampant in those ghetto-minded peeps.

In referring to the ghetto logic –several more articles on this subject are coming- the reactionary ignoramus’s who because of racist community leaders- the Sharpton types – who funnel every truth and lie thru the clouded eyeball of racism, therefore castrating logic and becoming impotent to think logically and rationally about perceived events.

In the ghetto there are some who can rightly divide, though not the majority. Statistics prove this point, let us not forget that over 90% of blacks voted for Obama… twice!

America’s prisons are overwhelmingly black, here in Texas 80-90% of incarcerated are black. Are you going to blame whitey or the POPO for these numbers too?

The ghetto dwellers have been pointing fingers for decades, it’s long overdue for them to take a look at themselves in the mirror and funnel the anger where it truly belongs…Not society- we don’t owe you anything…Not whitey, we are not your problem…Not the PO-lice… you called them…Not even the slave masters of 150 years ago…The responsibility for the ghetto-dwellers sh–ty lives belong at their own feet.

As with all of the Ferguson events, from Brown robbing the mini-mart, till present day riots… ALL the accountability lies solely on the doorstep of Brown’s parents. Their not-so Jolly Giant child was not anti-government, he was anti anyone having the nerve to tell him what to do…including the mini store owner who attempted to get his five-fingered discounted property back out of Browns humongous hands -as seen on the store video- only a few minutes before his demise. He Brown, was never taught by his parents to color with-in the lines! In life, for a society to live peacefully together we stay within the lines of civility.

The promotion of racism creates lawlessness, which then spawns race base justice…which truly is no justice at all.

Next ISIS Propaganda Mastermind Said To Be University of Massachusetts Graduate