We said on 9/11 that we’d “never forget.” But when our president has a no-strategy strategy for stopping Islamic extremists, isn’t Washington sidestepping our commitment of remembrance, in addition to its duty to protect our land and liberties?

Indeed, Washington mocks those who gave their lives on that day that changed America by the fact that 13 years after 9/11, we still don’t have an out-of-the-box strategy for outwitting radical Islam.

America at the Tipping Point (Part 1)

Christine O’Donnell at The Washington Times was spot on when she wrote this past week:


“With just a week’s notice, (President Barack) Obama had an immediate strategy for dealing with the unrest in Ferguson, Mo., yet even with a year’s notice, he didn’t have a strategy for the violence and unrest in Syria. Isn’t it a priority of the federal government to present a ready defense against foreign enemies?” 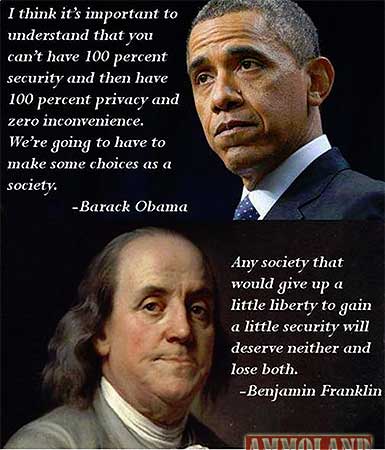 As Hot Air also reported, “America has no strategy, but (the Islamic State) does: Biological terrorism.” When a Dell laptop allegedly linked to the Islamic State was intercepted en route to Turkey from Syria, investigators found “a 19-page document in Arabic on how to develop biological weapons and how to weaponize the bubonic plague from infected animals,” according to Foreign Policy magazine.

It’s been said that one of the reasons the U.S. repeatedly finds itself in these perilous pickles with its adversaries is that we keep cycling from valuing liberty over safety to valuing safety over liberty. Chris Stewart — who, together with Ted Stewart, authored “The Miracle of Freedom: 7 Tipping Points That Saved the World ( http://tiny.cc/a4aklx ) ,” which describes how radical Islam came within a hair’s breadth of taking over the world in A.D. 720 — was interviewed by The Blaze and asked about this very point.

The Blaze asked Stewart, “What if we don’t really appreciate freedom as much as we think we do? Even today, average people are more concerned with safety and stability than they are with liberty.”

Stewart answered: “It’s a good point. I believe it is human nature to look around at the world today — or the world our parents lived in yesterday or the world we assume our children will live in tomorrow — and say: ‘Well, this is the normal state of the world. Things don’t change.’ One of the main points of this book is to point out how extraordinarily unique self-governance, liberty — whatever definition you want to give modern freedom — is in this world. You can talk to historians who specialize in this area. They believe that maybe 4 or 4 1/2 percent of us have been able to control our own destinies and lives.”

He added: “So it is easy to just assume that this is the normal state of the world.

But we have example after example of nations that have enjoyed freedom and then saw it recede or, for reasons you mention, collapse. There are the former Soviet bloc nations. Once the Berlin Wall fell, most of them marched quickly towards freedom. But since then, many of them (have) fallen back and are increasingly turning away. It’s been documented that there are only 22 nations in existence right now that have been democracies for over 50 years. I think that fact should shock people. For more than two generations, there have been only 22 nations that consistently embraced freedom. I think it illustrates pretty clearly that what we have is fragile and that it isn’t necessarily going to last.”

Our Founding Fathers — like those who have fought our wars — valued liberty more than safety. And so should we. They risked everything for freedom and their republic, trusting in God as they did. They wrote in the Declaration of Independence, “And for the support of this Declaration, with a firm Reliance on the Protection of divine Providence, we mutually pledge to each other our Lives, our Fortunes, and our sacred Honor.”

Sept. 11 can still serve as America’s pivotal wake-up call — one that even preserves our liberty and republic — as long as our leadership doesn’t slumber in safety while remembering it. But on the eve of another Sept. 11, it’s paramount for all of us to recall the costs of indecision and forgetfulness in critical times such as these, as well as the power of courageous leadership to deliver us.

As I pointed out last week, history repeatedly shows us that the only way to divert America’s imminent threats and political stalemates is to have strong and brave leadership — the type shown by courageous souls in critical moments of war or crises such as 9/11. Rather than a president who values safety over liberty, we need a president who values liberty over safety. We need men and women of valor once again to rise up and fight for the mantle of freedom.

President Ronald Reagan spoke of that type of fearlessness on the 40th anniversary of D-Day, when he asked:

“What impelled you to put aside the instinct for self-preservation and risk your lives to take these cliffs? What inspired all the men of the armies that met here? We look at you, and somehow we know the answer. It was faith and belief; it was loyalty and love. The men of Normandy had faith that what they were doing was right, faith that they fought for all humanity, faith that a just God would grant them mercy on this beachhead or on the next.”

May God grant us the same type of mercy as we bravely face foes, such as the Islamic State, who will do anything and everything to harm our people and bring down our republic.

About:
Action hero and Second Amendment activist, Chuck Norris is one of the most enduringly popular actors in the world. He has starred in more than 20 major motion pictures. His television series “Walker, Texas Ranger,” which completed its run in April 2001 after eight full seasons, is the most successful Saturday night series on CBS since“Gunsmoke.”In 2006, he added the title of columnist to his illustrious list of credits with the launch of his popular Internet column. Now Chuck is a regular contributor to AmmoLand, click the following link to See more of Chuck Norris on AmmoLand Shooting Sports News.