Along with this good friend Sen. Lindsey Graham(R-SC), Sen. John McCain (R-AZ) penned a New York Times op-ed this weekend calling on President Barack Obama to “confront ISIS now” and criticizing him for saying “We don’t have a strategy yet.” But asked by Fox News’ Greta Van Susteren what the U.S. should do about ISIS Tuesday afternoon, his first response was two short words: “Kill ‘em.”

“They’ve got to be destroyed, and you’ve got to have a goal, the president does, and we have to have a strategy to fit that goal and policies that will implement it. We have none of the above,” McCain said on Fox. He called Obama’s recent comments about the “messy” world “one of most unbelievable comments ever made.”

McCain continued his push for war in both Iraq and Syria, saying the fight requires the “full weight of American air power” as well as “some more boots and support on the ground.” He added, “All this didn’t have to happen. We could have left a force behind in Iraq that would have stabilized Iraq. And we are paying an incredible price for the president’s leading from behind, whether it be in Iraq, in Syria, in Libya, or a number of countries in the Middle East. We are seeing the chickens coming home to roost.”

The senator proceeded to seriously misspeak when he described a 2013 meeting in the White House in which everyone on the administration’s national security team “recommended arming ISIS.” But, he explained, “the president, by himself, turned it down.”

What McCain likely meant to say was that Obama’s team, including then-Secretary of State Hillary Clinton, wanted to arm the “moderate” Syrian rebels in their fight against President Bashar al-Assad, but Obama did not want to. Van Susteren neglected to correct his mistake.

As Obama decided at the time, the lack of distinction between the “moderate” rebels and the Islamic extremists, including ISIS, who were fighting Assad made the idea of arming any opposition in Syria an extremely risky proposition.

Ironically, this is an issue that McCain confronted personally when he made his unannounced trip to Syria last May. The senator posed in photos with men who were later identified as being responsible for the kidnapping of 11 Lebanese Shi’ite Muslims. As Jon Stewart put it later that week, “Oh my God, John McCain is literally palling around with terrorists!”

Here is one of the photos in question: 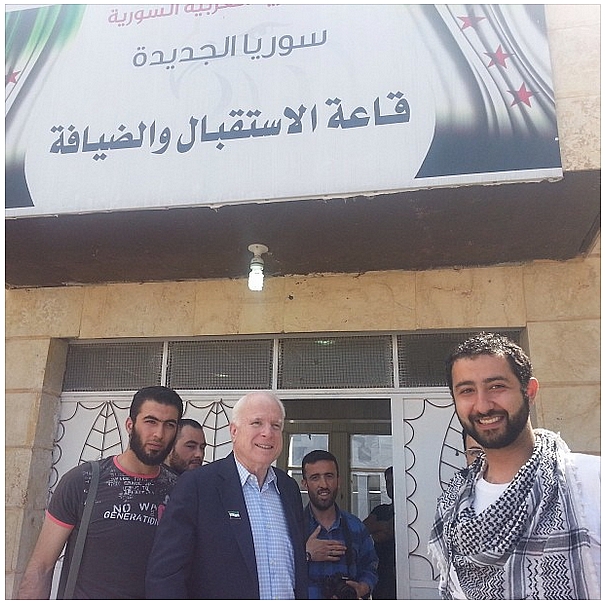 On the day that the video ISIS beheading U.S. journalist James Foley was released, the group VoteVets sent out a fundraising email claiming McCain had actually posed for photos with ISIS fighters in Syria. McCain has fought back hard against those claims, even pointing out that ISIS has labeled him a top enemy in order to prove his point:

While the claims that McCain “palled around” with ISIS fighters remain unfounded, his slip of the tongue on Fox News Tuesday afternoon demonstrates the complexities of the situation both two years ago and today in Syria and Iraq. On top of that, it bolsters Obama’s inclination to act prudently when it comes to the perilous situation in the region. The solution to this problem ultimately has to be more thought out than “kill ‘em.”