The Wall Street Journal reports that U.S. officials are struggling to ascertain the movements of suspected extremists once they enter certain European countries. The gaps are occurring despite the fact that the U.S. and several European security services have developed close intelligence links, with intelligence from both sides of the Atlantic buttressing terror watch lists kept by U.S. officials, such as the no-fly list. 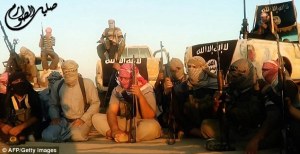 Efforts by U.S. intelligence officials to track American and European-born fighters who travel to the Middle East to join Islamic extremist groups like ISIS have been complicated by different approaches to sharing information and homeland security from their European counterparts, according to a published report.

The U.S. has already launched close to 150 airstrikes against ISIS in Iraq, and The Times reported that the final phase of the campaign would call for the extension of airstrikes into Syria, where ISIS has its home base.


Previous OUTRAGEOUS: School Security Guard to Army Officer 'You Can't Come In While Wearing Your Uniform'

Next Ferguson public meeting erupts in anger and accusations