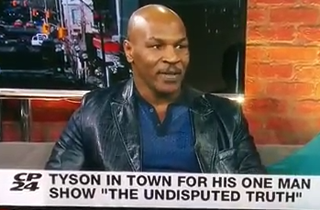 Mike Tyson was on a nice Canadian talk show this morning, doing a nice little hit about his one-man show playing in Toronto, when a surprise question sent him off on an expletive-filled rant.

Yesterday, Tyson had visited embattled Toronto mayor Rob Ford and endorsed his re-election campaign — a move that surprised his interview on CP24. “Some critics say that, ‘We know you’re a convicted rapist — this could actually hurt his campaign,’” said anchor Nathan Downer, and asked Tyson — who served three years in prison after being convicted of rape in 1992 — how he’d respond to his critics. (Some would actually say that Rob Ford would hurt Rob Ford’s chances of being mayor, but that’s nitpicking.)

“Hey, I don’t know who said that,” a stunned Tyson responded. “You’re the only one I’ve heard say that. I don’t have no comment to that, because it’s negative and you’re being negative. I met the mayor. There’s nothing anyone can do about it.

“I don’t care. What are you going to do about it?”

Watch below, in YouTube-user-filming-his/her-TV form, via CP24:

Next ISIS BADASSES, CAPTURED BY IRAQI ARMY, CRYING LIKE BABIES