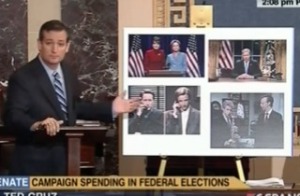 The Senate this week is debating a bill proposed by Democrats to add a constitutional amendment that would overturn the Citizens United Supreme Court decision and place more limits on campaign spending by corporations. Plenty of Republicans have attacked this as an assault on free speech, and Ted Cruz echoed these sentiments on the Senate floor today.

But he did it in a unique way: invoking SNL.

Yes, Cruz argued that the constitutional amendment proposed by Democrats would criminalize the political satire performed on Saturday Night Live. Cruz praised SNL‘s rich history of political satire, and even said, “Who can forget, in 2008, Saturday Night Live‘s wickedly funny characterization of the Republican vice presidential nominee Sarah Palin?” (And mind you, this is a good friend of Palin’s saying that.)

Cruz cried foul and said that no matter what Democrats’ intentions might be, their efforts would have the side effect of silencing a television program.

You can watch part of Cruz’s floor comments here, via C-SPAN 2: