On September 3 2013, AZ Central posted the audio of a 911 call that provides frightening insight into the terror that gripped a Phoenix, Arizona, widow as her door was kicked in and she came under attack. 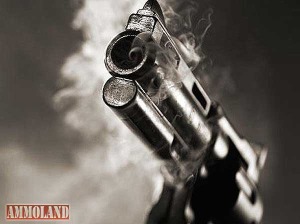 At the same time, the audio stands as further proof that a gun becomes an equalizer in the hands of a woman who finds herself in this situation.

As the tape reveals, the attacker–Michael Lewis–pounced on the 47-year-old woman, seemingly without considering the fact that she might shoot him. And when she did shoot, Lewis can be heard screaming and then asking, “What was that? What was that?”

The widow responded, “Did you think you could just beat me half to death?”

The woman then turned her attention back to the wounded suspect and said, “Don’t get up or I’ll shoot your (bleep) again!”

AZ Central reports that the widow’s late husband taught her how to shoot the .38 revolver.


Previous Battle for the Net: ‘Neutrality’ is fundamental basis of the Internet

Next California: Information on the Ten-Day Waiting Period Court Decision