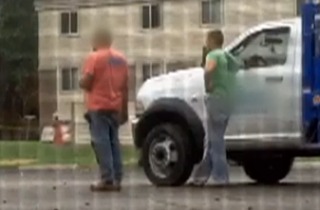 CNN spoke with two new witnesses to Michael Brown‘s shooting; two unnamed contractors, both of whom were recorded on video taken right after the shooting, shouting about how Brown had his hands up.

One of the contractors recounted how he heard a shot, then another 30 seconds later, and then witnessed Brown staggering as he put his hands up. But instead of telling him to get on the ground, he says, Officer Darren Wilson just shot him.

The other contractor said he saw Brown running from the police car, Wilson chasing him, and firing at Brown while his back was turned.

This account fits with an account told by another witness who spoke out weeks ago about the shooting.

Watch the video below, via CNN:
Source:

Previous Counterterrorism Experts: Idea that ISIS Poses Threat to U.S. is a ‘Farce’

Next Cheap Politicians – You Get What You Pay For