Law enforcement officials and city leaders from across the Rio Grande Valley are preparing for what they say could result in tense moments or violence.

Officials say they received word that members of a militia are threatening to block ports of entry.

In Starr County, international bridge authorities met with Customs and Border Protection officials Thursday. Their goal was to discuss the potential problem and find a plan of action. 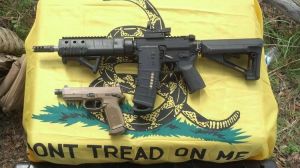 Officials received word that members of a militia plan to protest illegal crossings by blocking traffic on Sept. 20.

Rio Grande City Mayor Ruben Villarreal said members of the group have a right to express their opinion. His is concerned about the group’s intent, though.

“What can we expect? I don’t know. The unknown becomes an issue that we really got to prepare for,” Villarreal said.

“I’m a 100 percent sure that with the National Guard, with DPS, with Border Patrol and local law enforcement, we’ll communicate and we’ll handle whatever comes,” he said.


Previous [WATCH] Are acts of terrorism carried out by only 'a few' followers of Islam?