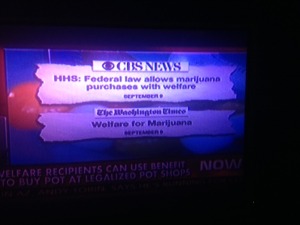 HHS- Health and Human Services- Has been reported by CBS news, saying that the “Federal law allows marijuana purchases with welfare.” Then there is this excerpt from a letter to Senator Sessions from the head of HHS….“HHS has no authority to prescribe policies and practices for the states to implement in order to prohibit the use of TANF benefit cards at marijuana stores.” Well as my mom would say, “what a bunch of hog wash” this letter could only be authored by a savvy slick shyster lawyer who has earned her degree in double speak. In essence the HHS has said…Hey we can’t stop people from using their benefit cards for buying pot. Therefore they just gave the green light for druggies, baby mamas and illegals –most people on welfare-to buy as much pot as their dollar limit will stand. The sordid details of where and when have not been released. This thought is so doable for many…If one thing is for sure, anyone who has to scavenge around to make ends meet knows all the food giveaways around town, the set days and times included. The rainbow and unicorn lovers know very well how to survive, and this announcement for free pot, provided by their EBT or TANF cards is their Eureka moment! Hey who needs to eat? Don’t worry about your kids, they can get fed at Michele’s feeding troughs, aka public school lunch rooms. So the sheeple-rainbows and unicorn folk- in our nation are frolicking down the yellow brick road of a moral free fall into insanity, being led forward by our present day pied piper, aka the democrat party…Which should speed up process for the complete inhalation of a once great America. I had heard some years back that Americans were the most medicated people in the world…so if not before, we will be soon. How can a nation stand whose population is so drugged that real current events mean nothing to them. Well one thing for sure the useless unicorns will be very compliant when they are loaded onto the box cars once again. At least their smoke clouded oblivious minds will keep them from feeling any real discomfort when the gas is pumped into the shower rooms. My question is…will the sheeple. Will their then corpuses be used as fuel for powering heat in buildings as the UK does with aborted babies?


Previous PENTAGON OFFICIAL: WHAT IT WILL TAKE TO WIN THE WAR AGAINST ISIS

Next OK, so it's a slow news day. Paris Hilton spends $13K for world's smallest dog.