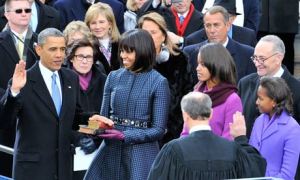 In a brief introduction to myself, I am a new contributor here and I look forward to engaging with its readers on the topics that matter to us all.  As a family man, Marine Vet of Iraq, and observer of politics, I have watched over the past 6 years as the opposition to Obama and his presidency has grown from simple internet rants to full fledge movements and parties.  Some have been steeped in the deepest controversies from birth certificates to Islam.  While others have been primarily focused on the political issues of his administration.  However, regardless of the scenario, this President has galvanized opposition in ways rarely seen.  Which brings me to the point of this article.

Personally, I have never been one to believe the worst of scenarios about Obama.  I do not think he has been a particularly good President at all, but being somewhat of a political centrist myself with some fairly obvious conservative leanings, I just never took the worst case scenarios presented.  However, given the staunch nature of the opposition to Obama whether it’s Republican, Libertarian, Tea Party, or conspiracy, so many have a great deal invested in the presence of Obama himself.

Unlike other scenarios, I can tell you the exact date that this one will take place should it come to pass as I think it will.  It will be televised and the world will be watching as this event takes place and American policy will drastically change as a result.  The date?  January 20th, 2017.  The event?  Inauguration Day. The day Obama is President no more.

This event will have varying effects on different shades of the Obama opposition.  In my opinion, it will be the conspiracy theorist who will be hurt the most.  I have been told by many, that Obama is a tyrant who will not cede power, he will take all our guns, and he will enact sharia law in America.  I have literally heard all of those.


So what happens on January 20th, if he does cede power, if we still have our guns, and if the Constitution is still the law of the land?  However, I don’t believe most of the Obama opposition falls into that category, just the most excitable.  Rather, a larger portion of the opposition has merely used Obama as the epitome for every facet of liberal ideology that they oppose.

So again, I ask, what happens when Obama is no longer there. He will in an instant, go from being the most powerful man in the world, to simply another man. From being the face of what conservative values must prevail against to basically Jimmy Carter.  Let that sink in.

The conservative movement has produced during these Obama years an excellent range of ideas worthy of consideration in the nation.  Some new, and some brought back to life.  Whether its fiscal restraint, gun ownership rights, foreign policy initiatives, veteran’s issues, or public welfare, Obama’s deep liberal ideology has produced its vivid conservative counterpoints.

However, without Obama, where will all these ideas go?  For me, this is the danger in making Obama the caricature of all that conservatives oppose.  He has rallied the opposition, but when he is gone, so too could be the ideas.  Consider the aimless wanderings of NATO after the fall of the Soviet Union. Is that what conservatives want for their hard fought ideas?

Oddly enough, the Obama administration seems to have done more for the prepping movement than any asteroid impact movie ever made.  But I am going to suggest prepping of another sort.  Namely, prepping for the moment, when Obama peacefully hands off power, and those who boldly pronounced or even merely insinuated that he would never do so now have to answer for 8 years of failed proclamations.

There are genuine ideas worth protecting from this deterioration in credibility.  The campaigns of 2016 simply can’t be against all things Obama as the country will understand that he is on his way out.  I am not saying there will not have to be some correction of the policies administered during the Obama administration, but Obama himself, gone. No tyrant, no socialist, no problem.

The Future and Beyond

In 2017, it will be roughly 72 years since the end of World War II.  You want to know the split between Republic and Democrat Presidents during that timeframe?  Nearly even at 36 years each.  That’s right, we have been governed equally by Presidents from both parties.

Consequently, in my view, it’s less about the party that wins and more about the ideas that reign in our society. I believe Obama will step down, I believe I will still own my gun, and I believe the constitution will reign supreme.  However, if conservative ideas and solutions fail to maintain its strong presence in the national conversation, that would be a tragedy.

So it’s time to start prepping for this conversation to be less about a lame duck President and more about ideas for a stronger America that benefits all in America.  So let’s start right now.  Begin sharing your ideas and share this article with those whom you frequently discuss such matters.  2017 and on might just depend on it.

To read more of my writings, I encourage you to check out my blog at
www.unprecedentedmediocrity.com .

Next DHS confirms that ISIS planning infiltration of US southern border