“Too Big To Fail” has never been applied to a besieged nation torn apart by sectarian factions, but let’s try it here: Afghanistan’s government recently asked the US for a $537 million bailout to pay its bills, and they’d like it within the next “five to six” days. 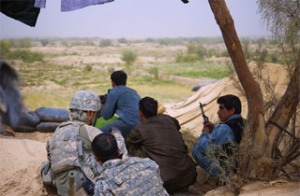 “We hope they will pay for us, and we are asking at once,” Alhaj M. Aqa, the director general of the treasury at the Ministry of Finance, told The Washington Post. “They are asking me when I need it, and I told them this week or we will have a problem.”

Thanks to a disputed presidential election back in April, which has deterred foreign investors and halted domestic spending (leading to a 25% fall in tax and tariff revenue), the Afghani government has burned through its reserve money and needs nearly a half billion immediately to keep up its infrastructure:

The government was barely able to cover its September payroll for more than 500,000 national and provincial employees, he added. And with its October payroll deadlines approaching, Aqa said the country’s financial challenges are now “critical”…

If additional money is not allocated, Aqa said, the government will have to begin deferring payment of bills for items ranging from fuel for government vehicles to official stationery.

The fiscal crisis could also hamper the government’s ability to feed more than 350,000 Afghan soldiers and police, Aqa said. Salaries for police and army personnel are not at risk because they are paid directly by the U.S.-led coalition.

Currently, the US has spent nearly $104 billion in Afghanistan, which runs on an annual budget of $7 billion, which is not a lot of money.

Next O’Reilly: Obama, Congress Should Pass a Declaration of War Against ISIS