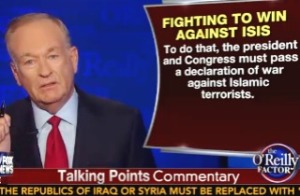 Bill O’Reilly said on Monday night, September 12, 2014, President Obama is not “fully engaged” enough on ISIS, and if he wants to show his commitment to taking out America’s enemies, he and Congress should work to pass a formal declaration of war. The “war” label was thesubject of some debate in the past few days, withsome apparent internal conflict over whether it’s fair to say the U.S. is “at war” with ISIS.

O’Reilly proposed this because as far as he’s concerned, the idea of a coalition is a “pipe dream.” He went down a list of nations that, with two or three exceptions, aren’t really doing much to help the effort against ISIS. O’Reilly remarked, “We are living in a cowardly world.”

And that’s why, he concluded, America and President Obama must lead:

“We need a presidential commitment to kill terrorists wherever they may be. To do that, President Obama and Congress should pass a declaration of war against Islamic terrorists. We need to have an official document that says, ‘Here we come.’”

O’Reilly did conclude by wondering if Congress will actually act or if “we need a few more beheadings” before they finally understand what the U.S. is up against.

Next Satanic Temple to distribute materials to school children in Florida