For the last 25 years, banning so-called “assault weapons” has been at the forefront of the anti-gun agenda.

However, in recent days, an article from ProPublica and a “study” from The Center for American Progress indicated that the gun control establishment is shifting away from advocating for semi-auto bans and towards background checks/registration.  The “coincidence” of these publications appearing days apart hints at what might be public relations scheming, rather than a genuine shift in viewpoint.

While this supposed de-emphasis on semi-auto bans should be met with skepticism by all gun rights supporters, the items discussing the reevaluation of priorities are instructive in that they illustrate the quarter-century-long campaign against semi-autos was unjustified from inception. 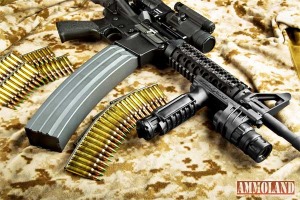 The ProPublica article cites several prominent gun control activists who are now downplaying the importance of semi-auto bans.  Bloomberg mouthpiece Shannon Watts, who started Moms Demand Action specifically to target semi-autos, acknowledged to ProPublica that at some point she “realized that pushing for a ban isn’t the best way to prevent gun deaths.”  Similarly, Bloomberg employee Erika Soto Lamb mused, in regards to semi-auto bans, “we feel like it’s a more productive use of our time, effort, money, voices, and votes [to focus] on policies that are going to save the most lives.”  The Brady Campaign’s Dan Gross also noted a shift in focus, stating that semi-auto bans are not the “greatest opportunity” to “prevent gun violence.”

The ProPublica item goes on to cite the 2004 federally-funded University of Pennsylvania study that determined the federal semi-auto ban’s “impact on gun violence is likely to be small at best, and perhaps too small for reliable measurement.”  NRA has been quoting this study’s findings for a decade.

For its part, the Center for American Progress’ “Assault Weapons Revisited” paper noted that there has been a shift in the gun control community towards supporting restrictions on “who” may own firearms rather than “which” types of firearms Americans can own.  Nevertheless, the paper also advocates for an array of policy options for restricting semi-auto ownership, just short of a total ban (see related story).

These acknowledgements and purported changes in goals are a far cry from the hysterical rhetoric we heard when gun controllers were advocating for the federal semi-auto ban in the early nineties and for its renewal in 2004.  In 1994, then President of Handgun Control Inc. (later renamed the Brady Campaign to Prevent Gun Violence) Richard Aborn, emoted, “The case to ban assault weapons is so overwhelming that it need not be discussed further.”  In the statement, Aborn went on to insist, “While our children are crying out they are also watching… What message will we send them if the law refuses to respond to their cry for help by failing to remove weapons of war from their midst?”  A 1990 Brady ad referred to popular semi-autos as “drug guns.”

In the in the mid-to-late 2000s, the Brady Campaign attempted to gin up support for renewing the federal ban by exploiting the public’s fear of terrorism.  Prior to the ban’s sunset in 2004, Brady lamented, “we are on the brink of allowing a flood of that ‘mass-produced mayhem’ to be available to our terrorist enemies who seek the tools of violence.”  Other Brady materials called the sunset, a “dire threat to public safety.”

Needless to say, similar rhetoric has accompanied more recent “assault weapon” ban campaigns, with President Obama himself asserting in 2012, “weapons that were designed for soldiers in war theaters don’t belong on our streets.”  New York Gov. Andrew Cuomo (D) even indicated earlier this year that opponents of his expanded “assaults weapons” ban are extremists who “have no place in the state of New York.”

A murder rate that has continued to drop since 2004, multiple studies on the nonexistent effect of the 1994 ban, and now the gun control activist’s own acknowledgements, make clear that the campaign against semi-autos was never about evidence-based public policy.  Instead, it was an attempt to use emotion to further a major front in the cultural war on gun owners:  banning guns – any guns – by any means possible.

Even though the gun control community’s emphasis may have shifted to background checks and registration, their tactics are the same.  Similar to the anti-semi-auto campaign, gun controllers continue to rely on wild rhetoric and misinformation.  The most notable recent example is the continued misuse of the statistic purporting to show that 40 percent of firearms sales occur without a background check, to impress upon people just how supposedly vital background check/registration legislation is.  Even though the statistic has been debunked by the Washington Post and the recent experience of Colorado, the website for Everytown for Gun Safety (among other gun control outlets) still promotes the fallacy.

NRA members understand the truth.  The gun control movement wants to eliminate civilian firearm ownership.  As the public would never support this, firearm prohibitionists need to take incremental steps towards their goal.  Any incremental step towards their ultimate goal is a victory for them, no matter how illogical or unsupported by fact.  When one of their proposals is soundly rejected, they simply shift to another one of their proposals, while temporarily shelving the other for a more opportune time.

Today the primary focus of the major gun control organizations is background check/registration legislation.  However, these groups would gladly shift back to primarily advocating for gun bans if given an opportunity to advance such legislation.  That is why, regardless of the gun control movement’s current pet cause, gun rights supporters must remain vigilant on all the various issues that affect our rights and the underlying tactics of emotional manipulation and disinformation our opposition uses to promote their agenda.

Next America at the Tipping Point (Part 3)