The father of the suspect named in the ambush killing of a Pennsylvania state trooper told police his son is an excellent marksman who “doesn’t miss,” a police affidavit released Tuesday said.

Hundreds of law enforcement officers fanned out across the dense northeastern Pennsylvania woods Tuesday as they tracked Eric Frein, a survivalist with two high-powered rifles and a grudge against police. Frein was identified by police as the gunman who killed one trooper and injured another in a late-night ambush outside a state police barracks.

His father, Michael, a retired major in the U.S. Army with 28 years of service, told police that his son is an excellent marksman. The suspect lived about 20 miles from the ambush site and lived with his parents until a few months ago, Lehigh Valley Live reported. A sniper training magazine was reportedly found inside the parents’ home. 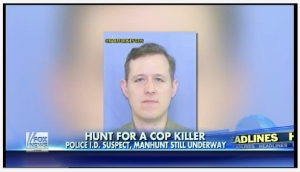 Frein, 31, of Canadensis, is “extremely dangerous” and residents in the area should be alert and cautious, State Police Commissioner Frank Noonan said at a news conference in which he revealed the suspect’s name.


“He has made statements about wanting to kill law enforcement officers and also to commit mass acts of murder,” Noonan said.

Next ]VIDEO[ On the cusp of the New ISIS Hollywood Production- US General responds with "boots on the ground" ????