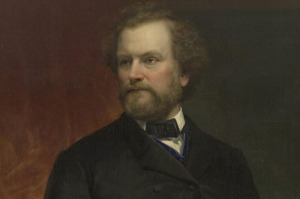 Samuel Colt was born in Hartford, Connecticut, on July 18, 1814. His patented revolvers, capable of firing multiple shots in quick succession without reloading, provided a crucial firepower advantage to settlers and soldiers who were expanding the United States westward in the 19th century. On the bicentennial of Colt’s birth, learn 10 surprising facts about the man who revolutionized the firearms industry.

1. Colt was an early adopter of assembly-line production.
More than a half-century before Henry Ford used assembly lines in his automobile factories, Colt employed them to produce his revolvers in his enormous Hartford armory beginning in the 1850s. Using interchangeable parts, Colt’s armory could turn out 150 weapons per day by 1856. The mass production allowed Colt to make his weapons more affordable to gun-buyers settling the West.

Colt was a masterful marketer and self-promoter who relied on more than just advertisements. He personally commissioned artist George Catlin, famous for his depictions of Native Americans and life in the West, to incorporate Colt revolvers into a dozen paintings, six of which were reproduced as mass-market lithographic prints. In one painting, Catlin even depicted himself on horseback wielding one of Colt’s “revolving pistols” to gun down buffaloes on the Plains. Colt also hired authors to pen stories about his revolvers for magazine features and traveled the world to present heads of state with lavishly engraved, gilded pistols. The gifts were good for business. After Colt presented an Ottoman sultan with a gold revolver, the Turks ordered 5,000 of his pistols. Ever conscious of building his brand, Colt even trademarked his sprawling signature.

3. Colt produced his own version of July 4th fireworks.

As a teenager, Colt experimented with gunpowder and electricity. While working in his father’s textile factory in Ware, Massachusetts, in 1829, he posted printed notices that announced: “Sam’l colt will blow a raft skyhigh on Ware pond, July 4. 1829.” Using a wire wrapped in tarred rope to connect an underwater explosive device to an onshore detonator, the experiment worked, although it drenched onlookers dressed in their holiday finery in pond water and mud. The following year on July 4, another of Colt’s experiments set a building ablaze at his Amherst, Massachusetts, school. In the 1840s Colt returned to his youthful experiments and partnered with telegraph inventor Samuel Morse to improve waterproof cables.

4. A ship voyage as a teenager gave Colt the idea for a revolver design.

Banished from school following his Fourth of July pyrotechnics, Colt was put on a ship bound for London and Calcutta in 1830 by his father. During the voyage, the 16-year-old became fascinated by how the ship’s wheel could spin or be locked in an affixed position through the use of a clutch. Reportedly, this observation sparked his idea for a revolving chamber capable of holding six bullets that could lock into place. During the voyage, he whittled a rudimentary model out of scrap wood, and upon his return to the United States, Colt worked with more experienced gunsmiths to perfect a prototype of a pistol that could fire multiple rounds in quick succession.

5. He spent three years as a traveling huckster.


After returning from his voyage, Colt toured the lyceum and fairground circuit in the United States and Canada as the “celebrated Dr. Coult of New York, London and Calcutta.” Posing as a “practical chemist” with a portable laboratory, he entertained crowds by administering nitrous oxide—laughing gas—to audience members. The money Colt earned provided seed capital for his planned firearms business.

Colt was only 21 years old when he received a patent in 1836 for his revolver design, which improved upon a revolving flintlock already patented by Elisha Collier nearly two decades earlier. That same year, Colt’s Patent Arms Manufacturing Company opened its doors in Paterson, New Jersey. The company saw scattered sales in Texas and in Florida for use in the Seminole War, but the business floundered. Without significant military contracts, the factory closed in 1842. Its fixtures and inventory were auctioned off to the highest bidder, and Colt was left deep in debt.

7. His brother was convicted of murder in a sensational trial.

Read the rest at: http://www.history.com/news/10-things-you-may-not-know-about-samuel-colt

Next Ebola worst-case scenario: Over half a million people infected