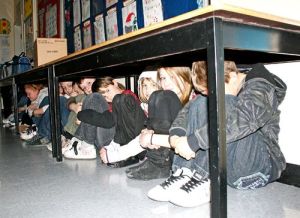 “Officers searched the John F. Kennedy Middle School and its surrounding grounds, but police said the initial search ‘revealed nothing of a suspicious nature,’” WFSB.com reports.

The school district alerted parents of the lockdown, which of course made them very worried. Several nervous parents waited outside of the school during the search, but those who approached were told to go back and wait in their cars, according to WFSB.

“We got a phone call 15 to 20 minutes ago saying a teacher saw a suspicious person in the area and that’s all they said,” parent Courtney Peluso told the news site.

“It bothers me a little bit, it makes me wonder who is walking around, but they’re safe like the officer said, they are safe,” parent Andrea Smith said.

Next College Student Forced To Remove American Flag From Balcony: 'It Might Offend Foreign People'