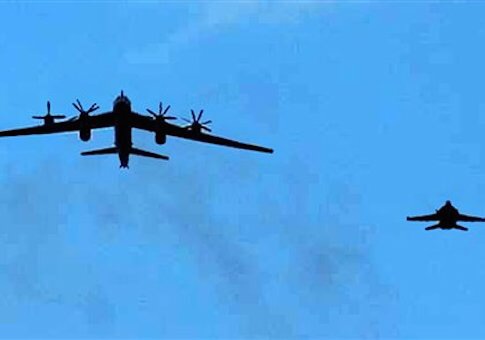 In this photo released by the U.S. Navy, an F/A-18 Hornet from aboard the aircraft carrier USS Nimitz, escorts a Russian Tupolev 95 Bear long rang bomber aircraft on Feb. 9, 2008 / AP

Russian strategic nuclear bombers carried out air defense zone incursions near Alaska and across Northern Europe this week in the latest nuclear saber rattling by Moscow.

A day later two more Bear bombers were intercepted by Canadian CF-18 jets in the western area of the Canadian air defense identification zone near the Beaufort Sea, north of Alaska, he said.

One defense official said the Russian bomber activity appeared timed to the visit to the United States and Canada by Ukrainian President Petro Poroshenko. The Ukrainian leader was in Ottawa for meetings with Canadian leaders on Wednesday. He met with President Obama on Thursday.
Ukraine is locked in a battle with Moscow over the Russian military annexation of Crimea and continuing backing of pro-Russian Ukrainian militias in eastern Ukraine.

“The approaching aircraft were identified as two Tu-95 Russian Bear H bombers,” he said. “The Russian flights originated in the Barents Sea and went through international airspace down to the North Sea off the Dutch coast.”

The Russian aircraft flew in international airspace “close to NATO territory” but did not violate allied airspace, the officer said.

The NATO jets were scrambled as a response to the approach of unidentified aircraft, the officer said.

The type of NATO jets involved in the intercepts was not provided. The Telegraph reported that British Royal Air Force Typhoon jets took part.

“This is a standard procedure because these flights also pose a potential risk to civil aviation given that the Russian military often do not file flight plans, or use their on-board transponders,” he added. “This means civilian air traffic control cannot identify these aircraft nor ensure there is no interference with civilian air traffic.”

The officer said similar intercepts have taken place in the past. “NATO jets routinely identify, intercept, and escort Russian military planes that fly unannounced in international airspace but close to allied borders,” he said, noting the missions are “entirely defensive.”

“The event that occurred on 16 September shows NATO aircraft from several allies cooperating and coordinated by national and allied air command and control centers in a mission that reflects NATO’s readiness and determination to ensure collective security,” he said.

In a related development, Sweden’s military on Friday confirmed that two Russian Su-24 fighter-bombers violated the country’s airspace on Wednesday. A Gripen jet fighter was scrambled to intercept the jets.

Russia’s strategic aviation forces have sharply increased flights in recent months in Asia, near Alaska, Canada, and the United States and Europe.

The flights were carried out amid growing tensions with Russia over its military annexation of Ukraine’s Crimea and continuing covert military destabilization of eastern Ukraine.

The NATO alliance announced earlier this month that it is creating a rapid response military force in Eastern Europe to counter the growing threat of Russian intervention.

“Russia’s aggressive actions against Ukraine have fundamentally challenged our vision of a Europe whole, free, and at peace,” NATO said in a concluding statement Sept. 5.

“They are having a very aggressive nuclear readiness exercise now as a show of force,” McInerney said. “Whereas the U.S. has been on a path of nuclear zero which they think is ridiculous.”

McInerney added: “The Russians sense weakness in American leadership and they are trying to intimidate us and show us that our nuclear deterrent forces are vulnerable to Russian nuclear forces.”

Other recent Bear bomber incidents included a practice cruise missile attack by two bombers off the coast of Canada earlier this month. That incident appeared timed to the NATO summit meeting in Wales.

More than 16 bomber flights were tracked and intercepted by U.S. and Canadian jets during a 10-day period that month.

The new aggressive military posture appears to be an element of Russian President Vladimir Putin’s policy of seeking to return Russia to its Soviet empire status.

Russia, under Putin, is engaged in a large-scale nuclear buildup that includes new missiles, submarines, and a new bomber.

On Sept. 10, the Russian navy conducted a test firing of a new submarine-launched ballistic missile.

Russian military forces also are bolstering forces in the arctic as part of Moscow’s efforts to secure resources in the region.

Two military bases are being built at Wrangel Island, on the arctic Chukchi Sea north of the Russian Far East, and on Cape Schmidt, also on the Chukchi Sea, the Moscow Times reported Sept. 8.

The report said the bases were part of Moscow’s efforts to restore the Soviet military presence in the resource-rich arctic.

Russia also is deploying new attack submarines to the region.

Update 5:50 P.M.: This story has been updated to include developing information about the Russian incursion off the coast of Alaska.

This entry was posted in National Security and tagged Russia. Bookmark the permalink.

Next Texas Man Facing the Death Penalty For Shooting At Intruders, Turning Out To Be A No-Knock Raid