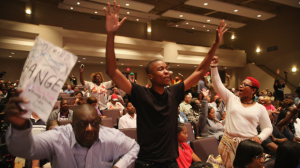 ST. LOUIS (KMOX) – KMOX News has learned Ferguson protestors are seeking St. Louis Rams tickets in the hopes of getting into the Edward Jones Dome and disrupting this Sunday’s game against the Dallas Cowboys.

We first heard about the threat Tuesday at the St. Louis County Council meeting.

“It’s not going to a fun day Sunday at your beautiful Rams game,” one protestor said.

Speaking with KMOX hosts Debbie Monterrey and Michael Kelley on Thursday morning, St. Louis Police Chief Sam Dotson said he’s well aware of those threats and is working on plans to counteract them.

“We are having extra resources in the downtown area for this weekend to address any eventuality,” Dotson said.

Next [PHOTO] VA Letter Tells Veteran He Is Incompetent, Not Allowed to Possess Guns or Ammunition