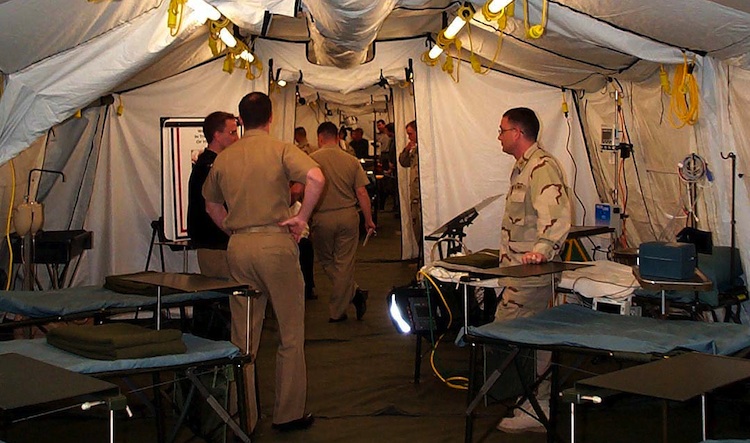 Joint Chiefs of Staff Chairman Gen. Martin Dempsey has reportedly told senior officers of a surprising shift in focus for the U.S. military — a shift away from counter-terrorism planning that, according to Fox News, is raising concern at the Pentagon. The change in focus apparently means Ebola is enemy #1.

According to a senior military official, Dempsey said at a recent meeting: “The Department of Defense’s number one priority is combating Ebola.”

The Obama administration’s decision to enlist the Defense Department in responding to the Ebola outbreak in West Africa has raised concerns that the task is pulling the already-stretched military away from other missions, including vital counter-terrorism operations.

The New York Times is now reporting that the president will announce today, Tuesday, the commitment of up to 3,000 U.S. military personnel to be sent to Africa, to the heart of the Ebola outbreak, to take charge of responding to the rapid spread of the deadly virus.

Senior administration officials said Monday night that the Department of Defense would open a joint command operation in Monrovia, Liberia, to coordinate the international effort to combat the disease. The military will also provide engineers to help construct the additional treatment facilities and will send enough people to train up to 500 health care workers a week to deal with the crisis.

The scramble to reallocate resources within the Defense Department is expected to be a hot topic, says Fox News, at a Tuesday meeting of the Senate Armed Services Committee.

While sources within the Pentagon indicate that not all senior planners are on board with the shift of resources away from Obama’s recently announced expansion of the fight against the Islamic State, some on Capitol Hill agree with the need for the urgent change.


Sen. Lamar Alexander, R-Tenn., the senior Republican on the Senate’s health committee, said Monday that the U.S. must take the Ebola threat as seriously as it does the Islamic State terrorist group. He added that he would support the Obama administration’s request for $30 million for the CDC and $58 million for the Biomedical Advanced Research and Development Authority in an upcoming bill.

“This is an instance where we should be running toward the burning flames with our fireproof suits on,” Alexander said in a statement. “This is an emergency. We need to recognize it, and we need to find and work with other countries in the world that recognize it.”

By some estimates, the death toll in the Ebola outbreak — largely in West Africa — is expected to reach 500,000 before it’s over. Ebola is known to be spread through direct contact with the bodily fluids of sick patients, though some health experts warn that the virus could mutate into an airborne form that would be much harder to combat and could threaten the United States.
H/T: Western Journalism


Previous OBAMA: 'Some American ISIS Fighters Have Returned To U.S.'

Next [WATCH] One Package Stealing Thief Finds Out the Hard Way, That Even the Preachers In Texas Pack Heat