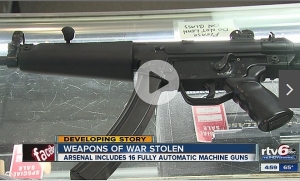 A trailer containing high-powered weapons and 20,000 rounds of ammunition was stolen from an Indianapolis gun store over the weekend.

According to Metro Police and ATF investigators, the guns were sitting in a trailer behind Profire Arms and Supply in the 7300 block of Rockville Road on the city’s west side.

The owner told police that the theft was discovered Saturday about 8:30 a.m. He also told detectives the trailer was locked and he is the only person who had a key.

The trailer contained M16 automatic rifles, AK47s, several machine guns, several submachine guns, an automatic UZI, and an Ohio Ordinance 249 belt-fed machine gun. Several handguns, shotguns and rifles, as well as silencers were inside. Police estimated the total value of all the firearms to be $225,000.


Don Davis, who has sold guns for more than 40 years at another Indy gun store, called the stolen firearms “weapons of war.”

“These things are dangerous. These guns you’re talking about here, you touch them (and it’s) bang, bang, bang, until they run out,” Davis said.

Next U.S. Ramping Up Major Renewal in Nuclear Arms