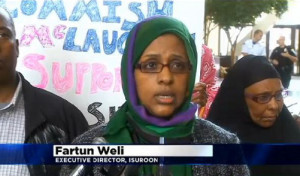 Muslim activists in Minnesota – that’s the heartland state that’s sent at least two men to fight on the side of Islamic fascists in Iraq – are demanding their own section in the local food bank so illiterate families can pick up free food that lives up to their expectations.

According to WCCO, the CBS affiliate in the Twin Cities, a group of first-generation Somali-Americans marched into Hennepin County Commissioner Peter McLaughlin’s office last week to demand he do something about the pork and beans and other free foodstuffs that are contaminating the provender.

If it were me working at the food bank, I’d be telling these vermin they could eat garbage! You don’t make demands at a FOOD BANK! -MD

Next VIDEO: RFK, Jr slams conservatives for the environment. Responds in anger as reporter questions his hypocrisy