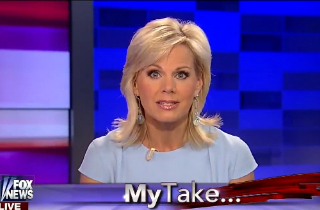 Over the past two days, students in a Denver suburb’s school district have organized a walkout in protest of a board review of the new AP American History curriculum. Fox News host Gretchen Carlson is not amused.

According to the Star Tribune, the changes involve a stronger promotion of “citizenship, patriotism, essentials and benefits of the free-market system, respect for authority and respect for individual rights” while whitewashing or removing materials that might “encourage or condone civil disorder, social strike or disregard of the law.”

It seems that the latter portion is what has upset many of the kids, as one student eloquently told the press that the board wants to “censor a lot of U.S. history so they can’t talk about some of the negatives, or they don’t want to talk about civil disobedience, which is censorship.” He added: “And censorship’s communism, censorship’s national socialism, censorship is terrible.”

Nevertheless, it seems Carlson believes the protestors must be hateful little commies, as she busted out the age-old “Don’t like it here? Then get out” line usually reserved for schoolyard political arguments. Her monologue below [emphasis added]:


The last time I checked, we were still living in the United States of America, where we have a national anthem and an American flag. Are they the next things to be controversial and talked about being thrown out? How could being patriotic or learning about patriotism be a negative? And what does it say about our young people in this country, and the teachers joining the protest, that promoting patriotism is now a negative. Ironically, the new curriculum being proposed is all about promoting individual rights like protesting. The new curriculum would also teach a free-market system like the one we already have. It would also encourage that there be no disregard for the law. Isn’t that why we have laws on the books? Or have we come to the point where breaking the law is now an admirable choice? Don’t get me wrong, I’m all for freedom of speech and the ability to gather and state your claim. But, quite frankly, if you don’t like it here, and you have a problem with promoting the basic freedoms that men and women have died for — protesting for the rest of us and protecting us — then get out.

Convincing stuff. Not at all oversimplifying the debate.

(By the way, is there any better argument for expanded school choice than partisan politics-fueled curriculum battles like this one? Take curriculum control away from all-knowing bureaucrats and put it in the hands of the consumers, i.e., the parents.)

Watch below, via Fox:


Previous The Cost of War: U.S. blowing up its own Humvees to Prevent Being Seized by ISIS