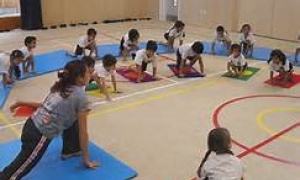 Our local fox 26 news just reported that Oak Forest Elementary School here in Houston, is now leading the charge and sounding the trumpet on the excellences of yoga. Soon 12 more schools in the area are to follow with yoga classes for the young skulls of mush. The video report showed the-white forty-ish conservative looking Texan-yoga teacher in a class with about a dozen kids on government paid yoga mats, who said that this-“yoga is for aiding the children in relaxing,”- all under the guise of-“making it easier for the children to learn.” However I beg to differ on what really is the agenda here. Whatever happened to reading- the Bible-for comfort and rest, aka relaxing? Or… then what about going home for relaxing?…No, because when the kids get home they have hours of homework to do, in order to make up for nothing being accomplished in the classroom for the last eight hours .

I left the land of fruits and nuts Cali in the late 90’s and after a whirl wind life in Hawaii we have settled in Texas. A conservative bastion, or so I was hoping. Texas now is like reliving the beginning of the nightmare of what happened in Cali in the late 60’s early 70’s…And if Wendy-abortion-Davis is elected governor, worse will be a guarantee! A liberal leftist God-hating agenda is being force-fed down the throats of semi-conscious Texans…Wake UP!

One should know that nothing good is ever promoted in public schools, why citizens of a free society send their children to public school is beyond me. Please, private school or homeschool the future of America. Or pull them out of certain classes, threaten your local schools with law suits, bring in the ACLJ (not ACLU) a Christian law team who fight liberal agendas in gov’t and public schools. Years ago I pulled my youngest out of the class where they were reading Harry Potter books, so what if the teacher rolls their eyes at your decision, that child is still yours.

Below, not in chronological order and not complete, the liberal agenda in our public schools nationwide


1970’s the start of earth worship and the birthing of ecology introduced into schools and curriculum. Remember “This is the dawning of the age of Aquarius?” Yep, been smoking that dope.

Removed the 10 commandments…Instead how about teaching Gods’ love John3:16.

Shut down public school prayer…I remember a prayer and the Pledge of Allegiance being done every morning in my public junior high. Mealtimes in Nursery School too, way back in the day.

Mosque field trips…Not just observing, but having the kids participate in prayer time, down on the ground butts lifted high…WTH? (This was in Boston, I think)

Now Yoga… Do you see it yet?

In the first place, Yoga is NOT an exercise. Even though Yoga pants and outfits are most likely a billion dollar industry here in God-less America.

Well if you don’t believe me in saying that Yoga is part of a religion then read here from Wikipedia:Yoga (/ˈjoʊɡə/; Sanskrit: योग, Listen) are the physical, mental, and spiritual practices or disciplines that aim to transform body and mind. The term denotes a variety of schools, practices and goals[1] in Hinduism, Buddhism (including Vajrayana and Tibetan Buddhism[2][3][4]) and Jainism,[5][6][7][6] the best-known being Hatha yoga and Raja yoga. The term yoga is derived from the literal meaning of “yoking together” a span of horses or oxen,[1] but came to be applied to the “yoking” of mind and body.[1]

The origins of Yoga may date back to pre-vedic Indian traditions. The earliest accounts of yoga-practices are in the Buddhist Nikayas.[8] Parallel developments were recorded around 400 CE in the Yoga Sutras of Patanjali,[9] which combines pre–philosophical speculations and diverse ascetic practices of the first millennium BCE with Samkhya-philosophy. Hatha yoga emerged from tantra by the turn of the first millennium.[10][11]

Yoga gurus from India later introduced yoga to the west,[12] following the success of Swami Vivekananda in the late 19th and early 20th century.[12] In the 1980s, yoga became popular as a system of physical exercise across the Western world. This form of yoga is often called Hatha yoga.

According to David Gordon White, from the 5th century CE onward, the meanings of the term “yoga” became more or less fixed, but having various meanings:[27]

And how is this ok to be taught in public schools? To your children, Mr. and/or Mrs. Christian? Especially given the separation of church and state lie of demons and democrats.

Yoga is to Hinduism as prayer is to the Christian. So yoga practicing Christian… do not be deceived. I just laid out the truth and facts of yoga, the choice is yours.

Next America and Its Muslim and Black Problem