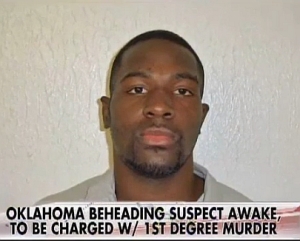 According to authorities, the suspect shot during a rampage that involved a beheading has regained consciousness in the hospital and been questioned, though authorities did not report what if anything he said.

Alton Nolen had recently been fired from the Vaughn Foods processing plant in Moore, OK. Police say he drove his car into the building and attacked two coworkers, beheading one woman, before one of the owners of the store shot him; the second victim is recovering from multiple stab wounds.

Authorities do not believe Nolen had targeted them. “He wasn’t targeting anyone, wasn’t going specifically after them,” a police spokesperson said. “It appears they were just in his way as he came in.”

Nolen had a criminal history, and had also recently converted to Islam. According to CNN his social media accounts contained images of graphic violence and references to judgment day. However, no link has been established between Nolen’s actions and any larger group or cause.

Nolen is still in the hospital, but police expect him to be moved to jail shortly.

Watch a panel discussion on Mr. Nolen’s background below, via Fox News:

Next [WATCH] Cops Sued For Breaking Into Home, Arresting Woman For Recording Their Actions