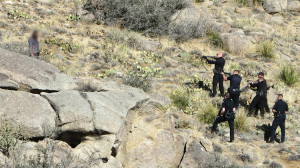 The video, obtained by KOB4 News, details a conversation between APD Officer Keith Sandy and another officer shortly before the fateful shooting of James Boyd.

During the conversation, Sandy can be heard discussing his desire to shoot Boyd, who he refers to as a “fucking lunatic,” in the penis with a shot gun.

“For this fucking lunatic?  I’m going to shoot him in the penis with a shotgun here in a second,” Sandy said.

Only two hours later, Sandy would do just that, taking Boyd’s life in the process.

“Two hours later he’s escalating the situation so he can do just that,” Kennedy told KOB4.  “It’s chilling evidence and stunning that he has not been criminally indicted…  It’s crystal clear and he says it with contempt in his voice.”

According to KOB4, internal investigators asked Sandy about his comment only one month after the shooting.

Interestingly, Sandy claimed the comment was never made only moments after telling investigators that the statement was nothing more than “locker room banter.”

Sandy attempted to belittle the incident by arguing that officers regularly make crude and cruel jokes, so much that a group of officers had to create a safe word to signal when inappropriate jokes have gone too far.

“Of course it’s not a joke because he went forward and actually shot him,” Kennedy said. “Clearly he has complete disregard for people suffering from mental disabilities.”

“What is so mortifying about this shooting, and thank goodness we have a tape to show exactly what he did– which is instead of shooting him in the penis, he shoots him in the lower back.  So had James Boyd not turned around at that moment to set down his bags, he would have been shot in the penis.”

Although currently on administrative leave, Sandy continues to carry his gun and badge according to an APD spokeswoman.

Next REPORT: Secret Service Has Allowed 1,000 Security Breaches, To Be "Politically Correct"