The Minnesota Star-Tribune has come under criticism after running a full-page anti-transgender advertisement in its Sunday edition.

Per the Minneapolis City Pages, the ad was sponsored by the Minnesota Child Protection League — which purports to be a religious-based tea party group countering the “radical homosexual agenda” — and was intended to pressure officials on the upcoming Minnesota State High School League vote on whether to permit transgender teens to join sports teams based on gender identity. 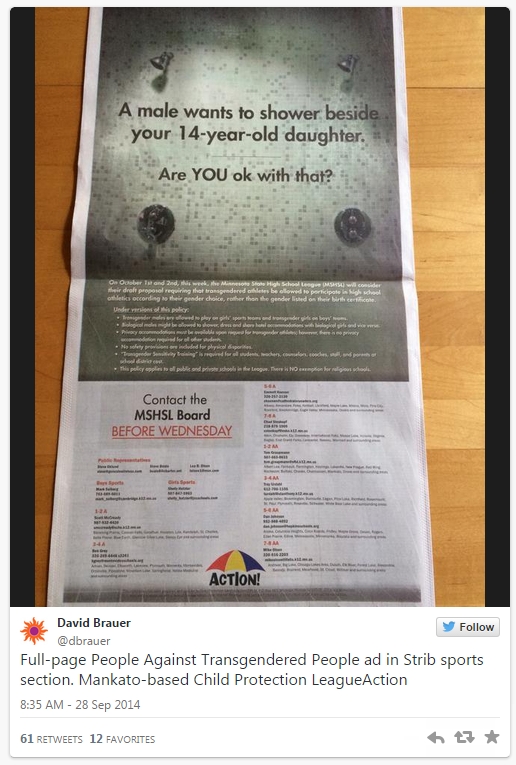 MCP asked the Star-Tribune for comment and was told that “the ad in question met all the requirements of our ad policy.”

When pressed further on the paper’s criteria for refusing ads, the Star-Tribune’s spokesperson said:


If you were doing a story on how media of all kinds (broadcast, print, digital) handle campaign and advocacy advertising, I’d consider how we could contribute to the conversation. But I don’t think that’s what you’re doing.

In Minnesota, organizations and individuals of all kinds — left, right, other — know that if you want to reach the largest audience and have the biggest impact with your message, the best way to do it is advertising in the Star Tribune.

So, basically, the newspaper is taking a stand against immorality and the liberal left is crying foul.

Next 24 Seconds of Drone Footage, shot during the Hong Kong, China Uprising