Want to know why American politics suck so bad? Here’s a primer from an anonymous Capitol Hill staffer who’s been at the job for 20-odd years, and who quit with an epic email detailing exactly why it is that Hill culture, and American politics, suck. 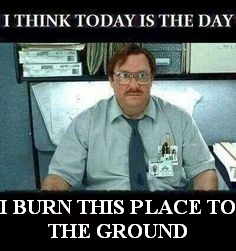 And when we say epic, we mean that in a literal, Odyssey-like sense, wherein the mystery staffer went through their history on the Hill and selected a spectrum of stories detailing Congress’s incompetence and stupidity. “After nearly two decades of unpaid and underpaid work, student loans for two degrees, late nights, playing therapist/nanny, dealing with angry phone calls, and always being on call like a sleep-deprived Florence fucking Nightengale, I got tired of hearing ‘You’re not dedicated enough’ one last fucking time,” he/she seethed.

The entire email is worth a read (along with a glass of wine), but we really, really want to know who their Congressman was:

I walked out on my job on Capitol Hill yesterday , and I don’t think anyone noticed yet.

I’ve been in this business for almost 20 years, and I’ve put up with a lot of shit. I know that’s not a surprise, but the shit I’ve endured is its own level of crazy. I’ve fucking had it.

My first internship was with a Member of Congress who was terrified of complaints. From a donor, a lobbyist, another member, aliens, his dog, whoever. A nasty call from a constituent, which is completely normal, could have him anxious for days if he knew about it. I watched him get all the way up to introducing a bill, and he got spooked because he thought someone would say the bill was a bad idea. Staff tried to convince him, but he couldn’t be budged.

I’m sure you’re wondering how someone like this got elected. This guy’s political party has held that seat since the 1940s so all he has to do is vote the party line. A block of moldy cheese could run for that spot, and as long as it has the proper party’s affiliation on the ballot…blue cheese 2014!

Putting the Country First
A few years ago, the entire country was on the brink of a recession and financial meltdown. Congress was about to vote on TARP, but what was the pressing issue in my office? What did we have to have a staff meeting about ASAfuckingP? Appropriate shoe attire. An individual who was about to vote on one of the most historic pieces of legislation didn’t have the courage to face his own staff to discuss his discomfort of heel height.

The Candidate With the Goldfish Memory
Several years ago, I moved my entire life across the country to work on a campaign that I thought was doing well. It wasn’t until much later that I realized the candidate didn’t know the difference between snot in his nose and the shit in his pants.

This guy couldn’t remember anybody’s name, despite multiple reminders and working with us for almost a fucking year. While most people think that’s normal for a politician, keep in mind that 15 people like me moved their lives across state lines to work 14 hour days for his semi-literate ass. And the pay was less than minimum wage.

I take that back. He only remembered two names: Shane and Kelly. Shane and Kelly were my coworkers, and the candidate knew that. He just didn’t know who they were. All the guys were called Shane and all the girls Kelly. Shane made a great point, “If this guy wins, someone is going to ask him who he wants to bring to DC with him. It’ll just be me and Kelly!”

Other shows of stupidity: calling people who didn’t give him money and thanking them for their donation, wearing a Hawaiian shirt for official campaign photos, and announcing to the local school board that his kids looooooooved their private school.

Thank god this guy never made it to Congress. The incumbent was just as batshit crazy as this guy was stupid.

The Disappearing Congressional Staffer
It doesn’t matter what time or what day it is. There’s a 50/50 chance this woman will be at work. And when she does show up, she enjoys a breezy 10:45 AM to 3:30 work day with at least an hour disappearance during lunch. She strategically picked the office that had the back exit so she’d make a show of coming in and then POOF! The first year at that job, I wasn’t sure she existed.

The rest of the office took bets on how often this woman would answer her phone or email. There was a 30% chance she responded to emails. Out of that response rate, 50% of them were one word responses. The other 50% were responses to questions, but if there were more than two questions in an email, she’d only answer the first two. Phone calls had a 5% answer rate. (We had a math major on staff.)

How did this happen? Life is easy when your husband is the chair of the state’s political party that endorses the boss.

The Paranoid Campaign Manager
The campaign manager never wanted any political position in writing. If you put something in writing, it can be misconstrued, misunderstood, used against the candidate, taken out of context, re-purposed, put on a billboard, or picked up by a spy drone. I don’t know. But she was convinced that putting anything other than this guy’s biography on paper would be a complete disaster.

She also thought voters were stupid. “Someone asked for a position on greenhouse gas emissions? Who would ever ask about that? That guy’s an outlier. No one else is going to care about issues like that. Talk him into donating or volunteering instead.”

The vote wasn’t close. At all. Bonus: almost everyone skipped the “victory party” on Election Night. I found out later, the campaign manager kept saying, “We could still win it, guys! The absentee ballots haven’t been tallied yet!”

After nearly two decades of unpaid and underpaid work, student loans for two degrees, late nights, playing therapist/nanny, dealing with angry phone calls, and always being on call like a sleep-deprived Florence fucking Nightengale, I got tired of hearing “You’re not dedicated enough” one last fucking time.

On the bright side, we have to applaud this mystery staffer for not becoming a lobbyist.