The St. Louis County prosecutor’s office is investigating an accusation of misconduct on the grand jury that is hearing the case against the Ferguson police officer who shot and killed 18-year-old Michael Brown.

Ed Magee, the spokesman for county prosecutor Robert McCulloch, said they received the information from a “Twitter user” Wednesday morning.

“We are looking into the matter,” he said.

An account of possible jury misconduct surfaced Wednesday morning on Twitter, when several users sent messages about one juror who may have discussed evidence in the case with a friend.

In one of those messages, a person tweeted that they are friends with a member of the jury who doesn’t believe there is enough evidence to warrant an arrest of the officer, Darren Wilson.

The same person who tweeted about being friends with a member of the jury has also tweeted messages of support for Wilson.

Magee confirmed that the Twitter user and feed came from an activist, Shaun King. 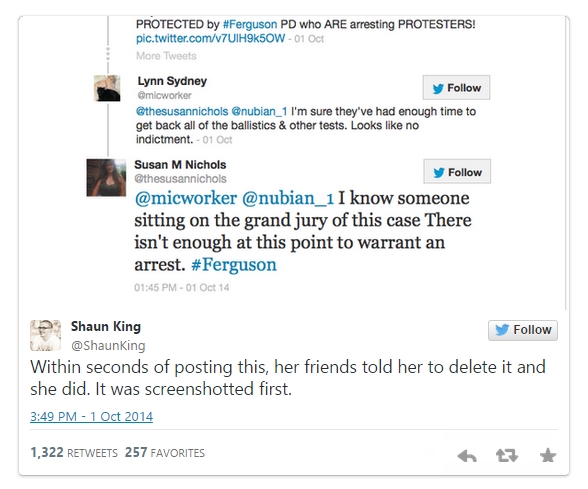 
Previous [VIDEO] The $1,200 Machine That Lets Anyone Make a Metal Gun at Home