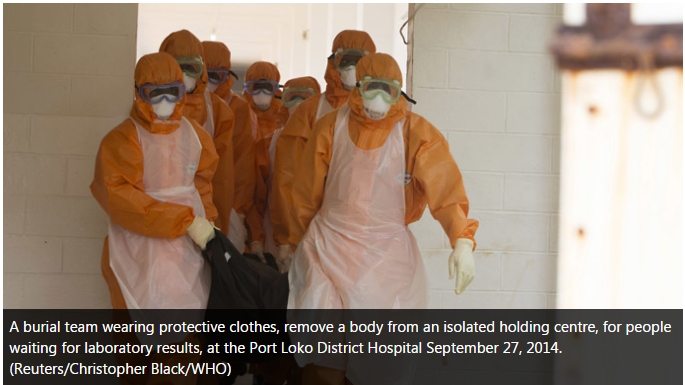 The man leading the UN response to the Ebola epidemic, Dr. David Nabaro, says Ebola poses a worse threat to humanity than HIV or SARS and the global effort to combat it is woefully inefficient and that he needs $30 million now.

Nabaro was speaking after various presentations on how to combat the disease, including at the UN Security Council and General Assembly, before he returns to Europe and West Africa, reports the Sydney Morning Herald.

Ebola has so-far been centered on the West African countries of Guinea, Sierra Leone and Liberia, and has infected 6,553 people and killed 3,083. So far the outbreak looks like it’s been arrested in neighboring Senegal and Nigeria, but the US Centers for Disease Control (CDC) believes that if it is not contained Ebola may infect 1.4 million by January.

READ MORE: US predicts Ebola could infect 1.4 million by end of January


Over a lifetime spent dealing with and leading international responses to epidemics and disasters, Nabaro said the current Ebola outbreak scares him more than any other.

“I can remember in Africa early on in HIV thinking ‘This is an unspeakably awful situation, but it will not decimate the population’…though we still lost millions. I watch this and I think it is much nastier than HIV. I remember working on SARS and being scared, but this is much worse than SARS. It is just spreading faster and faster and faster,” he told the paper.

I’m still amazed by how people don’t take this seriously, particularly our government. Think and say what you want but if there happens to be a couple of unreported cases of Ebola in America, the potential for mass outbreak is staggering.

That isn’t fear mongering, it’s a matter of fact. -MD


Previous Felon Doesn’t Know How to Unload Gun, Fires It at Neighbor’s Window Instead