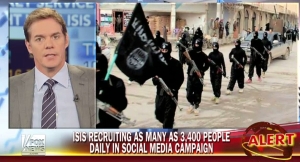 An Army intelligence bulletin is warning U.S. military personnel to be vigilant after Islamic State militants called on supporters to scour social media for addresses of their family members – and to “show up [at their homes] and slaughter them.”

The assessment, obtained by Fox News, came from the Army Threat Integration Center which issues early warnings of criminal and terrorist threats to Army posts worldwide.

The advisory warns military personnel and their families about the Islamic State, or ISIS, calling on supporters to target their homes.

While there is no independent intelligence to corroborate the ISIS threats, the bulletin recommends more than a dozen precautions to military personnel to protect their homes — and their online profiles.


“Given the continued rhetoric being issued by ISIL’s media services and supporters through various social media platforms the ARTIC is concerned of the possibility of an attack,” the bulletin says. “Soldiers, Government Civilians and Family Members are reminded to be vigilant of their surroundings and report suspicious activities to their respective military or local law enforcement.”

One section cites a jihadist tweet calling on lone offenders to use the “yellow pages” and social media to identify the addresses of military families, and to “show up [at their homes] and slaughter them.”

Previous POLL: Voters Reveal Which States They Want Kicked Out of The Union