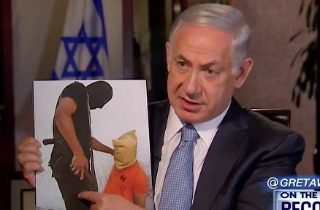 Israeli Prime Minister Benjamin Netanyahu was on Fox News with Greta Van Susteren tonight, and he continued to argue (as he did earlier this week) that ISIS and Hamas are the same threat, “branches of the same poison tree.”

He told Greta Van Susteren that they’re both “radical Islamic movements” that may use different tactics, but are equally dangerous. Netanyahu said, “ISIS beheads people, Hamas puts a bullet in their head. If you’re a victim or their family, the horror is the same.”

He showed a picture of what could easily depict an ISIS beheading, but what actually was a Hamas execution instead.

Next Patient With Ebola-Like Symptoms Being Treated in DC...