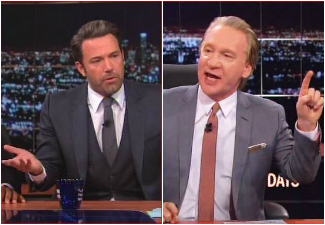 Ben Affleck, Bill Maher, Nicholas Kristol, Michael Steele, and author Sam Harris got into what could only be described as a tumultuous continuation of Maher’s comments on Islam from last week, with Maher and Affleck tearing into each other over the influence of fundamentalists in the Muslim community.

“We have been sold this meme of Islamophobia, where criticism of the religion gets conflated with bigotry towards muslims as people,” Harris began. “It’s intellectually ridiculous.”

“Hold on — are you the person who officially understands the codified doctrine of Islam?” Affleck, on the show to promote his movie Gone Girl, interrupted, and argued that criticizing Islam, as Maher and Harris were doing it, was “gross and racist. It’s like saying, ‘Oh, you shifty Jew!’”

“Your argument is, ‘You know, black people, they shoot each other,’” said Affleck.

“No it’s not! It’s based on facts!” Maher retorted.

Watch below via HBO: