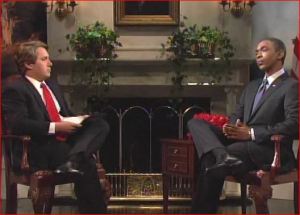 Asked by Steve Kroft (played by Beck Bennett) if he underestimated the threat ISIS poses to the Middle East, President Barack Obama (played byJay Pharoah) said they absolutely did, explaining that ISIS’s social media strategy in particular caught them by surprise. He then read a series of tweets, hashtags — and even a Tinder profile — to back himself up. As a result, he said, America’s response to ISIS has been moving “slow[ly] and deliberately.”

Pharoah expanded on this and even created a new Internet moniker: DTJ. That is, “down to jihad.”

They also poked fun at the recent security lapses at the White House when a Secret Service agent (played by Taran Killam) informed the president of a breach.

“I should probably go take care of that,” the president said before the show officially opened.

Next ISIS Supporters in America: The Jihadis Next Door?