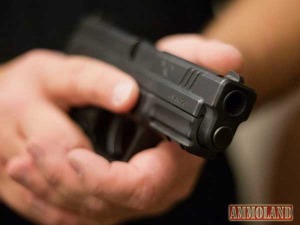 On October 3 2014, at about 4:30 a.m., a man opened fire on armed home invaders who forced their way into the family’s house while the mother was cooking breakfast.

KHOU.com reports that the son was in his bedroom when he heard a commotion. He grabbed his gun and was walking toward the noise when he heard his mother beg the home invaders not to hurt her daughters.

That’s when the son confronted the invaders and opened fire.

One of the three suspects fired back before fleeing, the second suspect simply fled, and the remaining suspect died from the bullet the son fired at him.

Eight family members were in the home at the time of the incident, and police say none of them were injured.

The Harris County Sheriff’s Office released scant information on the two suspects who are still at large. They did say that the suspects were speaking Spanish as they communicated with one another in the home.

Next [VIDEO] Woman Interrupts Restaurant Patrons With Tears and Screams, ‘This Isn’t Food, It’s Violence!’ — Wait Until You See Why