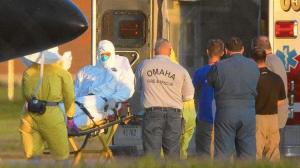 U.S. officials leading the fight against history’s worst outbreak of Ebola have said they know the ways the virus is spread and how to stop it. They say that unless an air traveler from disease-ravaged West Africa has a fever of at least 101.5 degrees or other symptoms, co-passengers are not at risk.

“At this point there is zero risk of transmission on the flight,” Dr. Thomas Frieden, director of the federal Centers for Disease Control and Prevention, said after a Liberian man who flew through airports in Brussels and Washington was diagnosed with the disease last week in Dallas.

Other public health officials have voiced similar assurances, saying Ebola is spread only through physical contact with a symptomatic individual or their bodily fluids. “Ebola is not transmitted by the air. It is not an airborne infection,” said Dr. Edward Goodman of Texas Health Presbyterian Hospital in Dallas, where the Liberian patient remains in critical condition.

Top Ebola Scientists Say CDC Clueless About How Disease Is Transmitted, Strain ‘Like None Seen Before,’ May Well Be Airborne

Yet some scientists who have long studied Ebola say such assurances are premature — and they are concerned about what is not known about the strain now on the loose. It is an Ebola outbreak like none seen before, jumping from the bush to urban areas, giving the virus more opportunities to evolve as it passes through multiple human hosts.

Dr. C.J. Peters, who battled a 1989 outbreak of the virus among research monkeys housed in Virginia and who later led the CDC’s most far-reaching study of Ebola’s transmissibility in humans, said he would not rule out the possibility that it spreads through the air in tight quarters.


“We just don’t have the data to exclude it,” said Peters, who continues to research viral diseases at the University of Texas in Galveston.

Dr. Philip K. Russell, a virologist who oversaw Ebola research while heading the U.S. Army’s Medical Research and Development Command, and who later led the government’s massive stockpiling of smallpox vaccine after the Sept. 11 terrorist attacks, also said much was still to be learned. “Being dogmatic is, I think, ill-advised, because there are too many unknowns here.”

“I see the reasons to dampen down public fears,” Russell said. “But scientifically, we’re in the middle of the first experiment of multiple, serial passages of Ebola virus in man…. God knows what this virus is going to look like. I don’t.”

Next BREAKING: Connecticut Governor Declares State of Emergency Over Ebola as a Precaution