Two NYPD officers are under investigation after video showed one knocking out a teenager for smoking a cigarette. 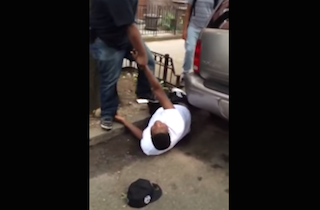 According to his lawyers Marcel Hamer was walking home smoking a cigarette when a plainclothes officer pulled over on suspicion that it was marijuana. Hamer was already on the ground when cell phone video obtained by the Brooklyn Paper began, protesting, “Mister, it was just a cigarette, sir,” as the officer tried to handcuff him.

The officer then struck him, perhaps hitting his head against the bumper of a truck, at which point onlookers began shouting that Hamer was knocked out. “Now you going to jail!” neighbors are heard to yell as the officer cuffs Hamer, who is not seen to move for the rest of the video.

Hamer’s family said that since the incident, which occurred in June, he has suffered from headaches and dizziness, alleging neurological damage from the blow.

The NYPD said Internal Affairs is investigating the matter, but did not comment further. Hamer pleaded guilty to disorderly conduct.

Watch the video below, via Brooklyn Paper: