This is on the eve of the Ferguson October Protests planned for St. Louis see more on the events HERE Over 6000 expected.

ST. LOUIS, MO (KTVI) – Protesters squared off with police in south city for the second night in a row. The demonstrators seeking justice for about the shooting and killing of an armed teen, Vonderitt D. Myers.

Meyers, 18, was shot and killed by an off-duty St. Louis police officer on Wednesday, October 8th.

The corner of Grand Avenue and Arsenal was the center for the latest round of protests Thursday night. The unrest began around 12:15 a.m. at the intersection near Tower Grove Park. The confrontations between police and protesters included a knife thrown at police, American flags burned, and police using pepper spray.

St. Louis police officers, some in full riot gear, tried to disperse a crowd of nearly 150 protesters. Police have described the gathering of the protesters as “unlawful assembly.”

As the group moved off of the street into Tower Grove Park, they were told to disperse because the park was closed.

One person was taken into custody.

Most of the crowd left the area around 1:45a.m., after heavy rain started to fall. 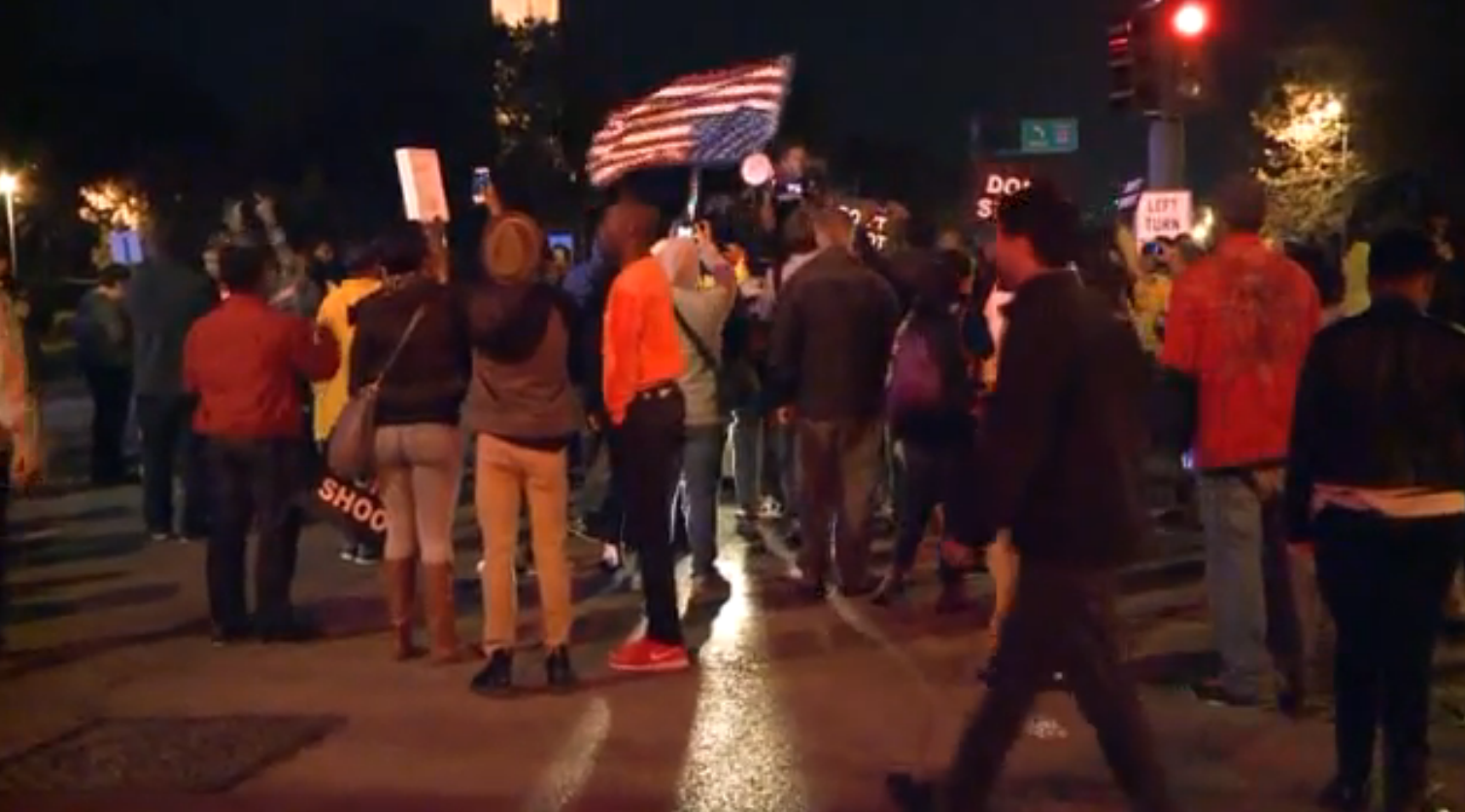 [VIDEO] Ferguson protest leaders: ‘We’ll take our anger out on people who failed us’

Organizers of demonstrations in Ferguson, Missouri, promised to intensify their protests over the killing of Michael Brown if the officer who shot him does not face criminal charges, warning police that they are prepared to die on the streets for their cause. […]

The cable news klieg lights, Al Sharpton and Jesse Jackson may have moved on, but residents of Ferguson, MO continue to experience nearly nightly unrest stemming from the shooting death of Michael Brown. Eye witnesses have told Breitbart News that pro-Palestinian and other Muslim […]

FERGUSON PROTESTORS HAVE SAID THEY WILL “BURN THE CITY TO THE GROUND” IN WILSON NOT INDICTED Ferguson, Missouri residents threw violent temper tantrums because race baiters inflamed tensions of the shooting death of Michael Brown by Officer Darren Wilson. Now officials are preparing […]

‘Take back our tanks’: Police can’t get rid of military gear in Ferguson aftermath

Police departments that have been slammed for increased militarization through the Defense Department’s surplus equipment program now have a new dilemma. Some of them have discovered they cannot give their unused war supplies back to the Pentagon. The DoD’s Excess Property Program […]

Grand jury considering the Ferguson shooting is being investigated for misconduct

The St. Louis County prosecutor’s office is investigating an accusation of misconduct on the grand jury that is hearing the case against the Ferguson police officer who shot and killed 18-year-old Michael Brown. Ed Magee, the spokesman for county prosecutor Robert McCulloch, […]

As if the governor of Missouri hasn’t done enough to prove what a race-baiting and worthless piece of sh*t he is, the Ferguson chief of police decided he would try to one-up the governor with his own form of stupidity. Hours after […]